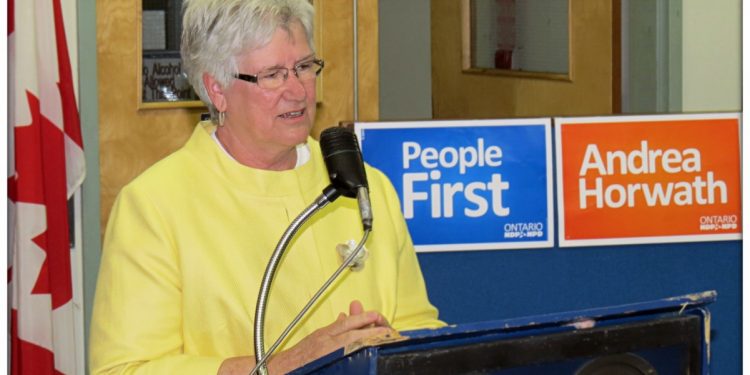 Cornwall Ontario — The Stormont-Dundas-South Glengarry Provincial NDP riding association nominated Cornwall City Councillor Elaine MacDonald as their candidate for the next provincial election at their nomination meeting on March 27 at the Navy Veterans Association in Cornwall.

MacDonald , a long-time community activist and retired educator is at the present time serving her second term on Cornwall City Council and is President of the Cornwall and District Labour Council, Co-chair of the Cornwall Chapter of the Ontario Health Coalition, and Treasurer and founding member of the SD&G Coalition for Social Justice.

MacDonald praised the work of NDP leader Andrea Horwath and the Ontario NDP caucus at Queen’s Park to get results that make life better and more affordable for everyday people. MacDonald stated: “As MPP, my first responsibility will be to the people of SDSG. We need good-paying jobs, youth employment, access to higher education, healthcare we can count on, greater affordability for everyday people, greater assistance to agriculture and rural communities, and a fairer tax system, one that will pay for essential public services and help the province balance its books. I’m running for the opportunity to work for these conditions.”

Brian Lynch, President of the SDSG Provincial NDP riding association told the crowd that the local NDP have had a substantial increase in their membership and fundraising during the past two years and are in a good position to run a strong campaign in the next provincial election. Lynch stated: “With our dynamic leader Andrea Horwath, with our progressive policies, with our outstanding candidate Elaine MacDonald, and with all of us working together, we can win SDSG for the NDP and help bring change for a better, fairer Ontario where no one is left behind.”