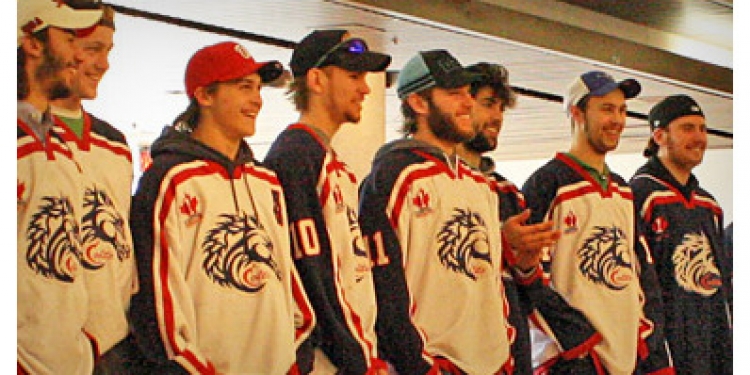 Cheers filled the air in Salon B of the Civic Complex as Mayor Bob Kilger and Cornwall City Council hosted a celebration event for the Colts, who recently defeated the Nepean Raiders to win the team’s fifth Central Canada Hockey League (CCHL) championship.

Those in attendance had a chance to meet the players and get autographs, see the Bogart Cup, get a souvenir photo and sign a banner that the team has taken with them to Truro for the Fred Page Cup.

Mayor Kilger took a moment to congratulate the players and co-owner and head coach Ian MacInnis on their great post-season run and he wished them well in the next round of competition.

“Just be yourself as an individual and a team and do whatever it took to get you here,” Mayor Kilger told the players. “We are proud of you today and we will be proud of you when you get back.”

For his part, Mr. MacInnis thanked the fans and the community for their ongoing support and he gave credit to his team for their commitment and hard work.

“It was complete energy and will, and that’s how you become champions,” said Mr. MacInnis. “We’ve got some work to do (still), and we’re going to do it.”

Kicking off on Wednesday, the Fred Page Cup features the winners of the CCHL and fellow Junior A leagues from Quebec and the Maritimes, as well as the host team. Other teams competing in the Fred Page Cup this year include Truro, Summerside and Longueil.

The winning team advances to the RBC Cup National Junior A Championship, starting May 11 in Summerside.

The Colts left for Truro on Monday morning.

In 21 seasons on the ice, the Colts have won five CCHL championships and a Fred Page Cup championship in 2000, and the team has also competed in two RBC Cups.

Eastern Ontario Health Unit On the Go 2013 Challenge starts May 6!