by SeekersAdmin
in News and Announcements
Reading Time: 2 mins read
5 1 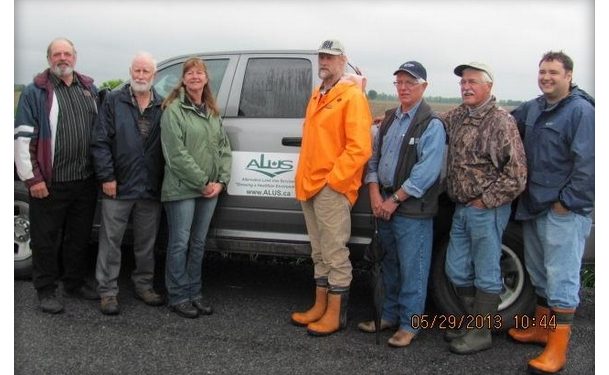 On Wednesday the 29th of May, Ontario East Alternative Land Use Services (ALUS) inaugurated the first of three demonstration projects slated for 2013, located on the farm of Jackie and Steven Pemberton (Winchester, Ontario).  This project, phased over two years, will see approximately one acre of marginal/fragile farmland retired from production.  The first phase of the project, completed in 2013, is a 4.5 meter buffer running along 500 meters of agricultural drain.  The buffer is composed of two rows of native shrubs and trees (white spruce, bur oak, red oak, butternut, high-bush cranberry, nannyberry, red-osier dogwood, and black elderberry) closest to the creek and a 3 meter strip of grasses between the woody vegetation and the land currently being worked.  The layout and composition allows for multiple benefits to both the farming operation and the environment, including accessibility, the retention of top soil and reduced erosion, improved water quality, and increases in both habitat and biodiversity.

The second phase of the project, scheduled for 2014, will consist of a 300 meter pollinator hedgerow designed to increase and maintain native bees and other pollinators on the farm.  A series of nesting structures for cavity nesting species (eastern bluebird, tree swallow, and wood duck) will also be installed within the buffer and perimeter of the hedgerow.

ALUS is now established in four provinces: Prince Edward Island, Saskatchewan, Alberta and Ontario.  The Ontario East ALUS initiative, which operates within the United Counties of Stormont, Dundas, and Glengarry as well as Prescott and Russell, is the latest addition to this conservation program that is going through a period of unprecedented growth.

Developed more than ten years ago by Delta Waterfowl Foundation and Manitoba’s Keystone Agricultural Producers, ALUS is a farmer-led, farmer-delivered incentive program that recognizes the unique role that farmers and ranchers play not only in producing food, but in enhancing the environment we all enjoy. ALUS creates a healthy, working landscape that simultaneously sustains agriculture, wildlife and the protection of natural spaces. Under ALUS, participating farmers receive payments to deliver a variety of environmental services such as reducing soil erosion, improving water quality and enhancing wildlife habitat and biodiversity.

The growth of ALUS into Eastern Ontario was made possible by major grants through The W. Garfield Weston Foundation and The Ontario Trillium Foundation, an agency of the Government of Ontario. A partnership between the Raisin Region Conservation Authority, South Nation Conservation, the SD&G Stewardship Council/Certified Forest Owners, Delta Waterfowl, and Ontario Nature will help facilitate the growth of this initiative. These funds, along with support from our local partners and volunteers, are enabling Ontario East ALUS to put 4-6 demonstration projects on the ground over the first three years of the program.

ALUS recognizes the ecological and operational value of converting selected parcels of farmland into natural habitat. This improves the overall health and success of the farm and also provides environmental benefits that all Canadians can enjoy beyond the farm gate.