OHA to Trick Or Treat for the Agape 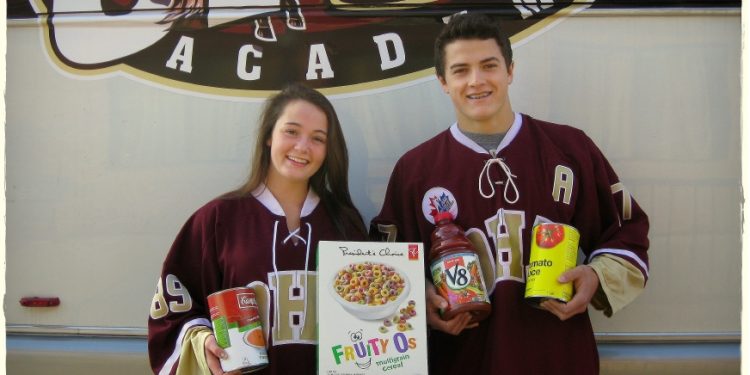 Cornwall Ontario — Hockey players wearing the colours maroon, gold, and white will be knocking door to door canvasing several neighbourhoods on Thursday October 31st. However they will not be wearing costumes, instead they will be clad in their hockey jersey’s, and they won’t be asking for candy, instead they will be asking for non perishable food items.
Students from the Ontario Hockey Academy, including Catherine Tufts and Ricky Young pictured above, will be collecting food for the Agape Food Bank this Halloween for a third year in a row.
Teams will be visiting several different neighbourhoods including Riverdale, Center town, around Home Depot, Sunrise Acres, and around Vincent Massey.
“It’s for a good cause, and it is the least we can do,” says Catherine Tufts who is the Co-President of the Social Committee at the Ontario Hockey Academy.
Student Athletes engaged in this food collecting activity will have the opportunity to volunteer and learn more about civic responsibility. The Agape Centre relies 100% on the donations of time, food, money, clothing, and other household items from the community to help families that access the services.
“The Agape Center plays such an important role in providing support in the Cornwall community. We are truly happy that we can play a role in ensuring the center is able to continue to meet our city’s needs”, says Principal Josh Harrison.
The Ontario Hockey Academy is pleased to go door to door this Halloween to collect food for such an important charity in our community.