Ruby Sushi: I’m over the moon… 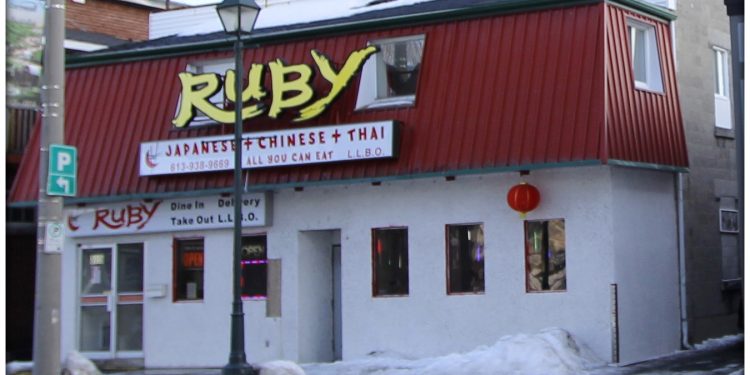 When I first moved to Cornwall in 2006, my biggest complaint was that there were no dim sum or sushi restaurants in town.  I love this city, but for someone who is accustomed to digging into sushi weekly, this was a huge let down.  Of course, this eventually changed.

First, there was J&T.  Then, there was the Moon.  I also discovered the A1 Chinese Buffet in Massena, which is pretty decent.  The three had some strong commonalities:  the food was good, but the service was less than friendly.

Nonetheless, ever since they opened, despite the fact that every time I go, I get to feel like I am

a major disturbance to them,  Moon is where I chose to spend my money.   Because the food is so amazing, I kept on returning.

Then, I found a Ruby!

It is no wonder that they named this place “Ruby Sushi”–the restaurant is a true gem.

It is really funny how things happen sometimes.  I had been hearing about Ruby since they opened, but  I wasn’t too keen on trying something new for fear of being disappointed.  I was ready to simply go to my usual stomping grounds when a friend of mine convinced me to go ahead and try it. ( #YOLO!)

The hostess / waitress was warm and welcoming!  She showed us to our table, explained the way things work in details, actually spent the time to answer our questions, came back several times to see if everything was alright… In other words, service was as good as it gets.  We really felt tended to and cared for.  That alone would have sold me.

But then came the food, and it was scrumptious!  The tempura was crispy, not greasy.  The salads were very fresh and the dressing extremely flavourful. The sushi bursted with taste and the sashimi just melted in our mouths.  We also sampled the General Tso Chicken, the Seafood Fried Rice and the Dim Sum, which were equally impressive.

For $19.99, you get all you can eat of what is probably the biggest à la carte selection around.  Soups, Salads, Tempuras, Rice, Sushis, Sahimis, Specialty Rolls, Teriyaki and many chinese concoctions for those who don’t particularly like raw fish.   A good variety of desserts (green tea ice cream=yum!), soft drinks, tea and coffee are also included.

Ruby Sushi is located at 315 Montreal Road and is open Sunday to Thursday 11am to 10pm and Friday and Saturday 11am to 11pm.  For delivery, visit their website at www.rubysushi.ca