by SeekersAdmin
in News and Announcements
Reading Time: 6 mins read
13 0 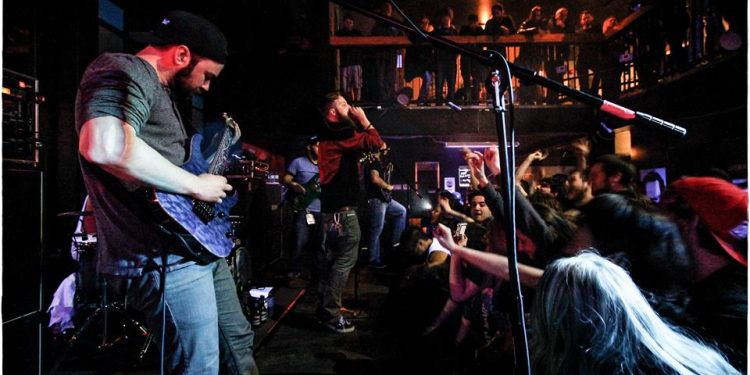 Cornwall Ontario — In was just a few weeks ago that Protest the Hero won the Juno Award for best Metal/Hard Music Album of the Year. It is probably no surprize that when this very talented band played a show in Cornwall Ontario on Tuesday night at the Vu Nightspot it sold-out. The band is on tour supporting their new album “Volition”.

#1 – Describe the experience and feeling of winning a Juno Award.

It feels really good. I never thought growing up we would win an award like that. The actual winning experience was strange for us because we were on tour at the time. We did six weeks in the US before we came back to Canada. We were in Wilmington North Carolina on one of the smaller shows of the tour when we found out that we won. It was kind of bitter sweet that we couldn’t be in Winnipeg to accept the award. We celebrated in our own way. We popped some champagne. We informed the crowd there, the US audience what a Juno was, and it was a really cool feeling. We were lucky we had some family out, girlfriends out, and had bottles of champagne with them. It was an amazing feeling, it is one of those childhood dreams, thinking I’ll never win a Juno especially with the type of music I play. It was really cool.

#2 – You’ve played big stages like Warped Tour and arena shows too. What does it mean for your band to visit smaller towns like Cornwall and to play more intimate show?

Personally I have more fun at the smaller shows. It seems like there is less to worry about, and we can kind of have a good time. I don’t think anyone expects the sound to be unbelievably good in a small venue. You kind of just go for it. It really does feel like you’re going back to your roots playing some of those venues you grew up playing. Most of this tour was called a B market tour. It just means not many major cities. Which is nice, it is good to get to (smaller towns) because a lot of people don’t want to travel to the big city that might be near them, and at a smaller venue you do get to see the band in a more intimate environment. I really enjoy it. I think when this eight week tour is done, it will be enough, and time to take a break. But I think it is definitely always worth doing, coming to places like Cornwall.

#3 – Drummer Chris Adler of Lamb of God appeared on your last album. What was it like recording and working with Chris?

Chris was a treat to work with because we actually met him before and he was a fan of our band. As soon as we asked him he said yes, absolutely, let’s do it. It’s cool to work with a musician on that level, because he has done it for so much longer than us, has been in the studio many more times, they have more albums. You could feel the experience that he has, playing with him, just how good of a musician he is. It was a lot of fun, and for us we had the same five members for over ten years, which is obviously the reason people liked us and respected us because we kept it together for that long. But on the other hand it was kind of nice to stir the pot playing with someone else, because we were so use to playing with the same guy. It was cool, and it definitely was a growing experience. I think it made our album better, or at least different, in a good way had it been just the same five members.

#4 – Bassist Arif Mirabdolbaghi has recently departed the band. Will he be returning to the band or is this a permanent departure? Can you tell us about his replacement.

The guy we have on tour with us now, his name is Cam McLellan, he is a friend of everyone in the band and produced our latest album, and he co-wrote half the songs with myself. He really is a big part of the band, and a bigger part of this album than Arif was. No I don’t think he’ll be returning to do touring, but his departure was so amicable, and it was coming for a long time. The doors open for him participate with the band in any way that he wants. If he wants to write with us, great. If he wants to do lyrics, great. Anything he wants to do, it is open. I still consider him a member of the Protest the Hero family but not a member of the touring aspect of the band.

#5 – Your latest album was funded online completely by fans, which is a departure from the record company paying to produce an album. Is this going to change the business model for bands who might want to go it alone?

It is hard to say, but it worked well for us. I don’t think it would have worked well if we didn’t put in the ten or twelves years, the three albums, the two EPs, all that touring that we did. I think we were working up to the campaign our whole career. It could change the face of music, not just ours, just the idea of crowd funding in general. I think you have to put in a lot of work before you see results like that. For us I think its definitely changed, I don’t think we’ll go back to the traditional label route unless labels completely change the way they approach putting out records. Which is hard for them to do and still make money. For us it has
definitely changed everything. I think the core members of this band thought this album would be our last. We didn’t know we would make our goal or anything. When we saw that ridiculous amount of support. I think you could say we were maybe jaded or say we lost touch with just how many people cared about our band. It was a huge reminder, we can still do this, and there are going to be people who want to hear it, and still want us to tour, and come out to shows like Cornwall and see us. It was cool. The Juno was a great feeling, but seeing the crowd funding, not financially even, but just to see that support, I can’t even describe it. It was pretty special.

#6 – You’ve had a few songs appear on the video game Guitar Hero. Have you ever played your own songs on Guitar Hero, and what was that like?

Yes I did, and it was cool. I had a friend growing up and still a friend today. He is the most ridiculous video game player and Guitar Hero player, and doesn’t play guitar in real life. So I sat down with him to play it the first time, and he killed me, and I was terrible at it. It was cool but weird at the same time. I should be able to do this, I know these rhythm’s and stuff, but I wasn’t able to, and he killed me at it. I wish Guitar Hero was as popular as it once was so we could get more songs in the game to play. It was great, and we were lucky to be a part of that.

Thank you for the interview Luke Hoskin.

Eric Williamson singing to the crowd

Congratulations Dreamer/Deceiver on a fantastic debut show in Cornwall!