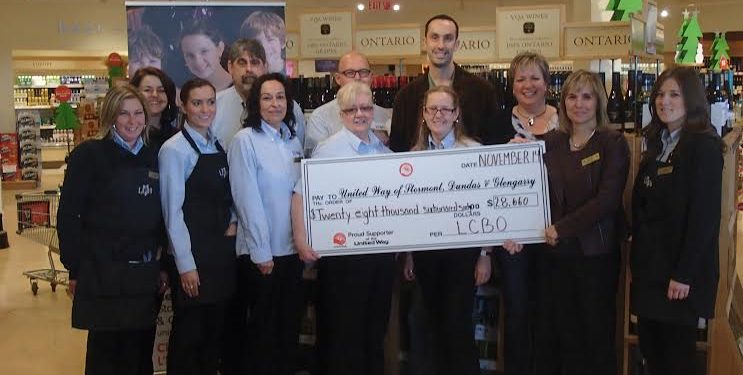 “The LCBO campaign provides a very significant contribution to our campaign each year,” said Nolan Quinn, 2014 Campaign Chair. “We are thrilled with the support of LCBO staff and the generosity of their customers. These funds will make a real impact in the communities of Stormont, Dundas and Glengarry.”

The LCBO point-of-sale fundraising drive raised $28,660. This impressive amount was the result of LCBO staff inviting customers at the cash registers if they would like to make a $2, $5 or $10 donation to support United Way. “Thank you very much to everyone involved and to all of the customers who said yes”, said Quinn “We appreciate it so much”. LCBO stores across Ontario participate in an annual United Way/Centraide fundraising campaign. The donation to United Way SD&G was comprised of donations from stores in Alexandria, Chesterville, Cornwall, Iroquois, Lancaster, Long Sault, Maxville, Morrisburg and Winchester.