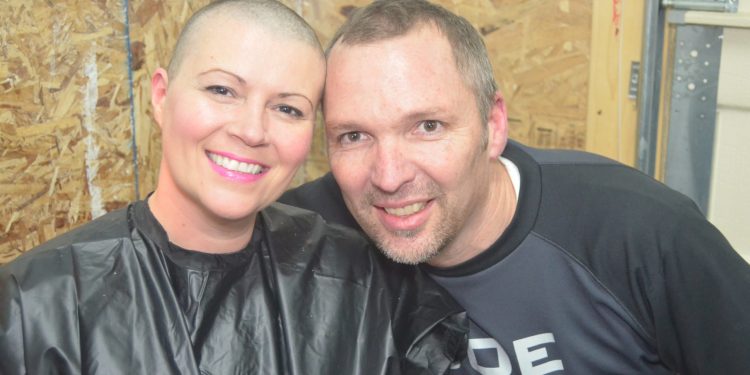 The gloves came off — and plenty of hair — to battle cancer in Cornwall last Friday.

More than 20 people, surrounded by about 30 onlookers, parted with their locks in solidarity with city cancer fighter Carole Johnston during a party to support her fight against breast cancer. Many going under the razor were family and the ages ranged from early teens right up to seniors.

It was an overwhelming show of support for Johnston, who recently had surgery to remove one breast and is now undergoing chemotherapy before facing more surgery. And it was fitting that Johnston — true to her personality — led the way.

Her long blond locks were the first to go — her husband Troy Blackadder was entrusted to do the honours — followed by steady procession of brave men and women afterwards, leaving the couple’s garage a sea of bald heads by mid-evening.

“I feel energized and I feel powerful — I really do — with everybody supporting me,” Johnston said as the event began to wind down. “And it’s overwhelming to me how much support I have.”

The speed with which the novel event came together came as a surprise to Johnston. It took life in just the manner of a few days, piggybacked onto her brother Denis’ famed “grease night” that he holds on a regular occasion to cook up mouth-watering french fries for friends and family.

It has been a short learning curve for Johnston, who was diagnosed with an aggressive form of breast cancer not long before the head-shaving event.

“I’ve done a lot of searching throughout this cancer and I didn’t want to be stuck in the corner crying, so I just embraced it adn learned everything I could,” she said.

And she has already working to raise the profile of breast cancer to help provide comfort for others who might be fighting the disease.

“I talk to people all the time so I can gain knowledge and I want to show knowledge too,” she said. “‘It feels good to be that person. I really want to do that for other people and help them.”

Cancer can be incredibly expensive to treat. In fact, most Canadians would likely be unable to afford treatment if it wasn’t for our universal health coverage. But people may not realize their are also ancillary costs that can take their toll on the financial health of a cancer fighter: Gas, parking, homeopathic treatments, all of which come directly out of the patient’s pocket.

Those are the costs that Johnston’s cousin Deana Johnston Ward is taking on through a Go Fund Me campaign (www.gofundme.com/boobsareoverrated) which has already exceeded Johnston Ward’s initial goal of $2,000.

“I just felt it was an opportunity. I know what Carole’s been through and I know she wouldn’t speak up and say she needs some help and it takes another person to step up,” she said at the event.

Carole has also accepting offline donations which are be recorded on the gofundme.com site, Johnston Ward said.

“It’s very expensive, extremely expensive and she is doing everything she possibly can because she knows that the odds of this cancer are so difficult that she wants to put herself in the strongest place possible to beat this.”

Editorial - No more money for the Art Gallery