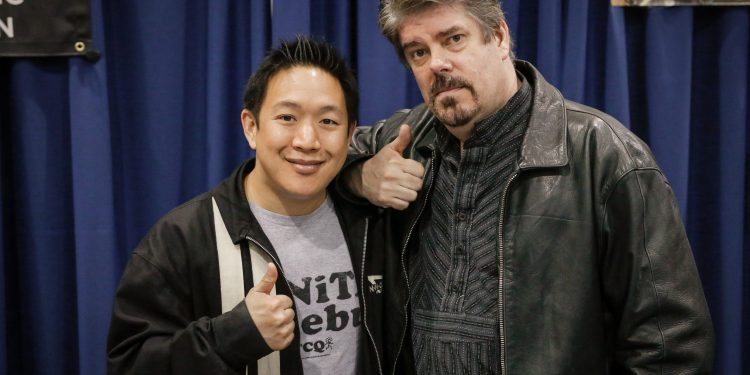 Article and Photo(s) by Jason Setnyk

Comic Book Men is a reality TV show that airs on AMC. The setting of the show is at Kevin Smith’s comic book shop, Jay and Silent Bob’s Secret Stash, located in New Jersey. Many celebrities have visited the store including Spider Man creator Stan Lee, Nichelle Nichols who played Uhura on the original Star Trek, and Dean Cain who played Superman in Lois & Clark.

Here is an exclusive interview by Jason Setnyk of The Seeker with Ming Chen and Michael Zapcic of AMC’s Comic Book Men at CAPE.

Jason Setnyk: Hi Ming and Michael, I would like to interview you, I’m with the Seeker newspaper.
Ming Chen: The Seeker, of course we know the Seeker, we were on the front cover!

Jason Setnyk: Wow, you knew about that, so awesome! My first question: What we see on television, is that what it is really like in the store on a regular day?
Michael Zapcic: We have people coming in trying to sell stuff, but what you don’t see is people bringing in their boxes of crap.
Ming Chen: We get a lot of garbage, probably 90% garbage.
Michael Zapcic: People bringing in water stained and damaged comics saying that they want full value.
Ming Chen: Or I want a million dollars for Richie Rich.
Michael Zapcic: Yup, not going to happen. Even if it is rare, it’s not worth much unless somebody actually wants it. The key to collecting is pretty much having something that somebody else wants.

Jason Setnyk: What was it like to meet Stan Lee when he came into the Secret Stash for a photoshoot?
Michael Zapcic: Stan Lee is awesome. He is every bit the legend we heard and just a very congenial man.
Ming Chen: They say never meet your heroes? Go meet Stan Lee, if he is anywhere within 500 miles, go meet Stan Lee.
Michael Zapcic: Yup, he is well worth your time.

Jason Setnyk: Talking about Star Wars, what did you think of the trailer for the new movie?
Michael Zapcic: I’ve played it on loop since it has come out. If I wasn’t coming to Cornwall, I’d be at home right now watching it over and over again. I’m at CAPE, and it’ll still be there when I get back.

Jason Setnyk: Have you seen the new Superman vs. Batman (trailer)?
Michael Zapcic: No. I’m waiting for Imax.
Ming Chen: Exactly, Imax, see it on the big screen, full resolution, none of this bootleg stuff.

Jason Setnyk: What are your thoughts about being in Cornwall today for CAPE?
Michael Zapcic: Canada is amazing, you’re so welcoming. Someone brought me Cuban cigars. I’ll have to smoke them before I go back across the border. Which, my god, I will.
Ming Chen: Cornwall, you guys are amazing. Canada, thank you for the warm welcome!
Michael Zapcic: Anytime you want us back, all you have to do is ask.

Jason Setnyk: Thank you Ming Chen and Michael Zapcic for this interview.