by Editorial Board
in 5 questions with..., News and Announcements
Reading Time: 47 mins read
33 0 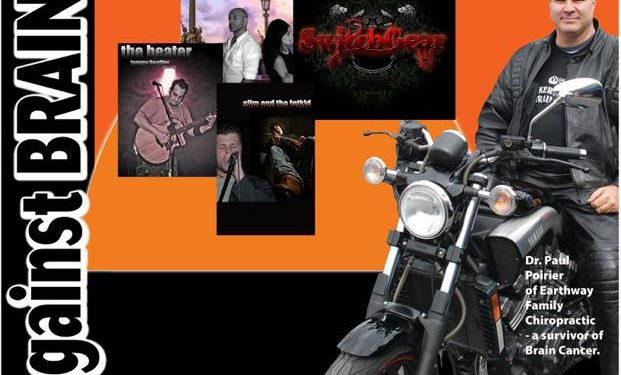 Dr Paul Poirier is a well known figure in our community. A wonderful example of a man with great motivation despite the fact that he has been battling a Brain Tumour for many years. Paul is a local Chiropractor, owner of Earthway Family Chiropractic, husband of Ginny Pereira and father of two wonderful boys, Zack and Benny but always has time to volunteer and organize the yearly fundraiser for Brain Cancer which he began many years ago. I had the opportunity to ask Paul about his latest fundraising venture and here is the interview.

1. What exactly is the bikers against brain cancer ride?

The BABC ride is a motorcycle awareness ride started in the fall of 2010 right here in Cornwall as a means to create more buzz for this often overlooked health condition and which few Canadians realize howwidespread it is in our corner of the globe.

2. I believe you were the founder of this event? Why did you start it?

I started the ride for I myself have undergone four brain surgeries, have a metal plate in my skull and have to date completed 2 years of chemotherapy.

3. I hear that there will be other events as fundraisers leadingup to this motorcycle ride on June 13th. What is the first event?

Indeed, this year includes several events…..starting with a sold out dinner and show tonight (Friday, May 22nd) at the new Riverdale Terrace where I’ll be hosting Mcgill University’s top man of science (and friend of 15 years), Dr. Joe Schwarcz who is best known from his time on the discovery channel’ s “the daily planet”. In addition to holding a phd in chemistry, Dr. Joe is also an accomplished magician and will be performing a chemistry based magic show!

4. So you are launching bikers against brain cancer week from June 4th til the ride on the 13th. What are the events planned for this week?

The events planned for June 4th to 13th include a rock concert to launch on Thursday June 4th (featuring 6 local bands) playing at “la Maison” tavern. On June 12th it is expected that we’ll have a “stand up” comedy act, June 13th is this year’s actual ride date….whereby all motorcycle enthusiasts will gather at Pommier Corner between 8:30 and 10am to register for the ride as well as partake in a pancake breakfast. The ride consists of going to a neat pub in Ormstown, Quebec (called the Rockburn Pub) but we’ll have several pit stop breaks on the way with my jeep following the procession stocked with oranges and bottled water! From there, we’ll head back to Cornwall for a pig roast BBQ hosted by “la Maison” Tavern from 4 to 7 pm (also open to the public). At 9 pm we’ll then have a “Black Sabbath/Ozzy Osbourne” tribute band from Toronto named “Crazy Babies”. Finally, August 8th, we’ll have a quasi “Led Zeppelin/Tribute 70s” Band also playing at “La Maison” Tavern.

5. What is the goal that you hope to achieve this year? and what are your future plans?

We’ll,  every venue will collect moneys that will all get pooled together and will be given to Mcgill University’s “Montreal Neurological Institute” toward research and development for brain cancer. As far as future goals, myself and my team of volunteers aim to make it grow more and more year after year!We invite you all to visit www.bikersagainstbraincancer.org and also drop by on June 13th to sample our pig roast!

Thank you Dr. Paul and The Seeker Team wish you all the best in your fundraising ventures! Let’s all come out and support the cause!