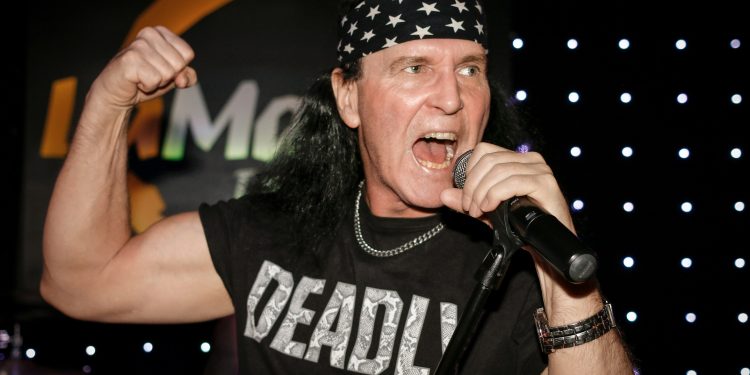 Article and Photo by Jason Setnyk
Cornwall Ontario — Before Bon Scott there was Dave Evans – the original lead singer of ACDC who was recruited into the band by brothers Angus and Malcolm Young back in 1973. Evans recorded the single “Can I sit Next to You, Girl” in 1974, and the b-side of “Rockin in the Parlour”.
He visited Cornwall Ontario on Saturday night as a part of his first ever Canadian tour. The original lead singer of ACDC performed an amazing concert at La Maison Tavern and shook Cornwall all night long. His original music is harder than ACDC and is almost reminiscent of Judas Priest in their prime.
There were about a hundred people in attendance who enjoyed the concert and got to experience an important part of rock and roll history.
Opening the show was ACDC cover band Thunderstuck. Next week local ACDC fans will be able to see another ACDC cover band for free at Ribfest. Perhaps the close proximity of these two events hurt attendance a little bit. However it shouldn’t have.
Dave Evans is a genuine and authentic musician and one ‘hell’ of a performer. His show is among the very best to come to Cornwall in the past decade.
After the concert Dave Evans met with fans, had his picture taken with fans, and signed autographs.
Evans musical resume includes being a part of Rabbit, The Badasses, The Hot Cockerels, Thunder Down Under, and the Apprentice. Most recently Dave Evans collaborated with former Alice Cooper guitarist John Nitzinger to produce the album Revenge in 2013, and in 2014 Evans released an EP length album that was nominated for two UK Music Industry Awards.
Dave Evans is continuing his Canadian tour with ACDC cover band Thunderstruck. This is his first visit to Canada, and hopefully he’ll be back again soon. He is an incredible performer.