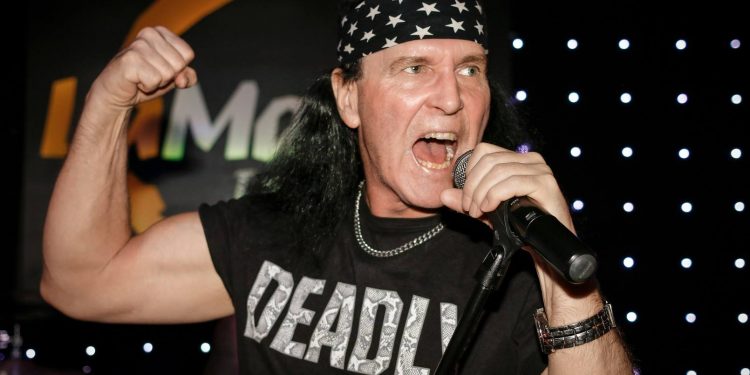 Cornwall Ontario – On Saturday, July 11th, 2015 music fans will experienced an important part of rock and roll history. Dave Evans, who is the original lead singer of AC/DC, will be live in concert at La Maison Tavern in Cornwall Ontario as a part of his Canadian Tour.

Dave Evans was the original singer of world renowned rock band AC/DC from 1973-1974. After leaving AC/DC Evans joined the band Rabbit and they signed to CBS records. The album “Too Much Rock And Roll” had a considerable amount of commercial success.

Evans musical resume also includes being a part of The Badasses, The Hot Cockerels, Thunder Down Under, and the Apprentice.

Most recently Dave Evans collaborated with former Alice Cooper guitarist John Nitzinger to produce the album Revenge in 2013, and in 2014 Evans released an EP length album that was nominated for two UK Music Industry Awards.

Dave Evans has many fond memories playing music in Australia and being in the bands AC/DC and Rabbit.

“There are so many. Back in the 70’s we all had freedom of expression with our music and our lifestyles and we exploited both to the full.

With AC/DC it was my first ever professional recordings and first ever record release which turned out to be a hit record for – Can I Sit Next To You, Girl?, which is still loved the world over. Our first film clip and the many shows including the biggest venues in Australia like the famous Sydney Opera House, Festival Hall in Melbourne etc and touring with the best at the time including Stevie Wright ex Easybeats and Lou Reed from the USA. Just all the excitement and quick successes were an amazement in itself. Becoming national stars in such a short time was an achievement for such a young band.

With Rabbit it was the camaraderie between all of us which still remains to this day. The craziness of the excesses of the 70’s and the popularity of the band. Releasing two albums the second of which, Too Much Rock n Roll, being released throughout Europe and Japan making us an international band. The very exciting and physical stage act was also great to be a part of with all members contributing to the spectacle of the Rabbit Attack as it was know. Also hearing both bands’ records on the radio and being featured on the many Australian national TV shows was a constant buzz. Great times back then for any young man to achieve success so early”, Dave Evans added.

While Dave Evans was growing up, music was always an important part of his family. This helped guide him into becoming a musician.

“We always had music at home as I grew up. My father sang in local town productions and we didn’t get television until I was 15 years old so music, reading and poetry was prominent in the home.

I sang at the local school concerts and the family would listen to music at home and all of us would sing along to the songs. It was fate for me to end up in a local band not long after I left school. My sister and I would write songs when we were still kids and thought nothing of it and just did it for fun. It is just a natural ability that we both had. My sister, Carol, though did not pursue a professional singing career as she married young and did not have the inclination to follow on with it seriously.

When I write a song I think of the chorus first and make sure it is a strong hook that everyone will relate to and I can hear them singing along to and then I write the verses to justify and to compliment the chorus. Then add a strong catchy riff to the song and that is my formula to getting it written and then recorded if I deem it good enough. Not all songs make it into the studio as there has to be a standard of excellence for the fans”, Dave Evans reminisced.

Those in attendance at La Maison Tavern can expect a terrific performance by Dave Evans. He describes his philosophy for a good rock performance as “P.E.D.C”.

“A good solid hard rock performance the Dave Evans way which I teach all my backing musicians – P.E.D.C. which stands for Power, Energy, Dynamics and Conviction”, Evans explained.

Internationally renowned AC/DC tribute band Thunderstruck will be opening the show for Dave Evans. Doors are at 9pm.

There will also be a meet and great with Dave Evans after the show. “Come along, and we are going to rock”, says Evans.

Tickets are $25 in advance and $30 at the door. Tickets are available now at La Maison Tavern. This event is being promoted by Rockstar Party.

“I’m so happy to be bringing Dave Evans, the original lead singer of AC/DC, to Cornwall. He is an important part of music history, and now people can experience it in an intimate venue”, says Rodney Rivette, owner of the Cornwall based music company Rockstar Party.