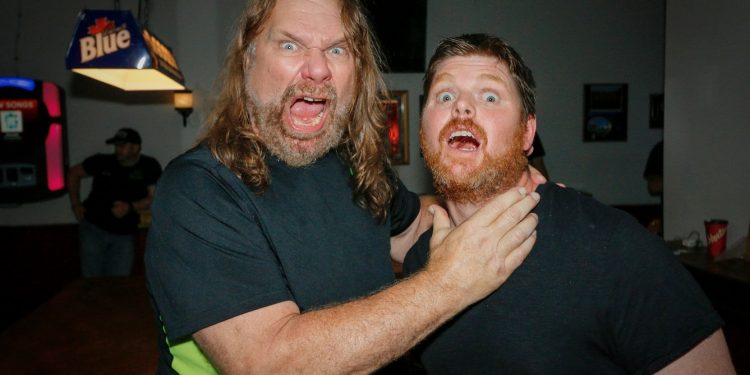 Cornwall Ontario — It was a night of wrestling nostalgia when Jake the Snake Roberts and Hacksaw Jim Duggan visited La Maison Tavern in Cornwall on Tuesday night for a spoken word event.

The event commenced with the tolling of the ring bell ten times. Hacksaw Jim Duggan asked everyone to stand in remembrance of Rowdy Roddy Piper who died a few days ago at the age of 61.

During his spoken word Hacksaw Jim Duggan reminisced about his career, from his very last football game in Hamilton, to starting off as an amateur wrestler developing his persona.

Jake the Snake Roberts soon slithered on to the stage and shared some stories too – from Andre the Giant, to Rick Rude, and some funny stories about the snake . There were also some serious moments in which Jake addressed his addiction to drugs and alcohol. He’s been recovered for over three years now.

The banter between Jake and Hacksaw was very funny and those in attendance listened attentively to the stories being told. After the show audience members had a chance to meet Jake the Snake Roberts and Hacksaw Jim Duggan for autographs and photographs.

For local wrestling fans it was a night to remember.