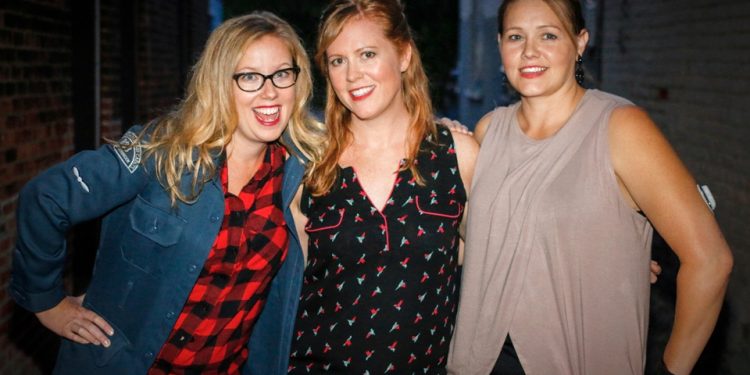 Cornwall Ontario — Over 130 people crammed into Deke and Squeaks for the Our Jokes Are Up Here comedy tour on Friday night. The comedy tour features four top Canadian headliners, but unfortunately Rebecca Kohler was unable to attend. Jen Grant Explained on stage that Rebecca recently receive a television writing job that she could not miss. “Basically she got a better gig”, Grant joked.

Christina Walkinshaw hosted the show with a raw no holding back style of comedy that the Cornwall crowd absolutely loved. She spoke of performing at Freddy’s early in her career, her love of beer and tinder, and her views on dating that was a little off beat. But her honestly and confident delivery made her adored by the crowd who
hung on her every word and laughed hysterically.

Walkinshaw is a stand up comic living in Toronto, she had a half hour comedy special on television, and she was nominated for Best Female Stand Up Comic at the 2012 Canadian Comedy Awards.

After a quick spot by local comedien Mark Vincent, who also promoted the show through his page Off Your Rocker, the laughs kept on rolling as Jen Grant took the stage. Right off the bat the audience fell in love with her witty charm and laid pack demeanour. Being born in Cornwall, and having ties to this town, Jen incorporated local flavour into her solid set speaking of being born at the Hotel Dieu hospital, Domtar, and she spoke of her family who live in Cornwall. The audience couldn’t get enough of Grant as she left the stage to a huge ovation.

Grant has achieved virtually everything you can achieve in the world of stand-up comedy in Canada. She has performed at every major comedy festival in the country including the Just for Laughs Festival, the Halifax Comedy Festival, and the Winnipeg Comedy Festival. All of which have aired on national television. She can also be heard on CBC‘s “The Debaters” and has her own TV special on The Comedy Network. ow living in Toronto, Jen lived in New York City from 2008-2011 and had the opportunity to play major comedy clubs with such legends as Jim Bruer, Robert Klein and Louis CK.

Erica Sigurdson took the stage with the audience already in tears from the other two phenomenal acts. She started off strong explaining how she flew in from Vancouver for this show (no her arms were not tired), joked around with the audience and played the crowd extremely well. Erica completely commanded the stage as she spoke of having no kids, or desire to have kids, camping in Vancouver and poked fun at the man in her life and men in general. Erica’s brilliantly written jokes with sarcastic delivery had the audience on floor in laughter. The audience could not get enough as the crowd showed their appreciation while she left the stage.

Sigurdson is best known for her wit on CBC Radio’s smash hit The Debaters. She is in high demand for radio, television and live appearances.In addition to her twenty-seven appearances on The Debaters, Erica has recorded five television specials in 2013 alone. Her comedy festival credits include Monteral Just for Laughts, The Winnipeg Comedy Festival, the Halifax Comedy Festival, the Vancouver Comedy Festival, and many others. In 2007 Erica was awarded a Leo Award for Best Comedy Screenwriting, along with co-writer Peter Kelamis, for her writing on the 21st Annual Gemini Awards.

These ladies of comedy are taking their show to the little Italy Theatre in Ottawa Saturday September 12th. The show starts at 8:30pm and is only $25 admission.