Spiritually speaking : Gandhian way to produce a symphony of hearts

by Editorial Board
in News and Announcements
Reading Time: 6 mins read
7 0 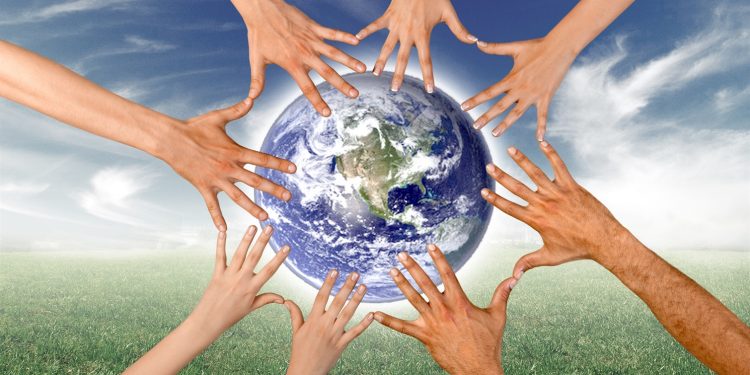 The United Nations declared the Second of October as the International Day for nonviolence. This day is to remember also Mahatma Gandhi who was born on the second of October and also   others who came into this world to write a new chapter in human era.  As   Moses, such persons lead the leaderless mobs through the Red Sea of a debasing journey of slavery to the land of freedoms. Mahatma Karamchand Gandhi is among such charismatic leaders.    As the Moses of his times, Gandhi steered the shaky Noah’s Ark of politics in the roughest weathers. His story is not an incident of losing a finger. Rather, it is a saga of offering hands in a calm that encourages the heroism of endurance to build the pyramids of justice. His struggle was not to touch the strings of a violin. It was a feat to produce a symphony of human hearts.

Mahatma Gandhi produced a symphony of human hearts. He was able to produce this symphony to achieve his goal of peace through peaceful means.   Karamchand Gandhi initiated the practice of nonviolent protests to achieve political and social changes.  He led protests across India for the removal of poverty, to free women, for unity among different religions and ethnic groups and to end untouchability, caste discrimination, for the economic self-sufficiency of the nation and above all for the freedom of India from the British rulers. He never wavered in his conviction in  nonviolence.

Before Mohandas Gandhi, the ideology of nonviolence was confined to the gospel of Jesus in the West and to the teachings of Gotama Buddha in the East. In social and political fields it was not a popular and acceptable concept.  With the exception of a few books and pamphlets here and there, this ideology never gained the momentum of a serious movement. Politicians now have started talking about the technique of nonviolence in depth.  It is encouraging that there are organizations and schools to focus on these strategies.

Yet, the world needs more such institutions to let the citizens know that through violence the darkness of evil keeps spreading even more rapidly. The only way to overpower this darkness is the light that is without the traces of the darkness of violence. Violence has never been able to solve problems.  If it has ever solved one problem, it has created many more. Violence is for animals and humans are above animals, because humans have intellect and consciousness, or a higher level of consciousness. The goal of violence is to destroy. Violence is an aggressive behavior that destroys even those who practice it. Jesus was right when he said that those who use the sword are killed by the swords.

There are persons who presume that the nonviolence is doing nothing, or it is a state of mind.  For them, nonviolence is inaction that is for cowards, or it is just an intellectual exercise.  Contrary to their belief, nonviolence is a deliberate course of action—it is to spread awareness of nonviolence to create a healthy atmosphere.  Nonviolence is creative, provocative, challenging, an active force of the highest orders. It is the force that represents God. Its main purpose is to respect life that is based on compassion and openness.  It works wonders and brings incredible results. It is not mechanical. Nonviolence is a conviction— a faith that is based on the principle that every life is sacred and every being is a child of the Supreme Power. Therefore no one has any right to kill anyone. Nonviolence suggests peaceful means to achieve peace. Nonviolence is based on the conviction that truth will prevail, because hatred brings more hatred and violence brings more violence.

Mahatam Gandhi gave a hope to humanity by proving that nonviolent strategies work. He proved that nonviolence is a creative force. His ideology has influenced several great minds of the world, including Dr. Martin Luther King, Jr. He practiced tolerance and pluralism that are adored in Canada and other democracies of the global village of today.

It has been proved in the laboratory of the world that the communities and countries that understand the values of nonviolence and practice these values prosper economically and their citizens prosper physically, mentally and artistically.  India is a multireligion, multilingual, and a multiracial nation. It has all the problems that one can imagine. Violence can cause unimaginable damages if its citizens begin to break each other’s head on the issues relating to language, religion, color of the skin, ethnicity and others.  The complex and diverse nature of India has developed over the centuries. To achieve peace in that nation, the country needs peaceful means. Gandhi has shown a peaceful way to his people to solve problems.

This is what Canada has been espousing and Ojibways, its natives, has been believing.   The Ojibways believes in the sanctity of life. The Ojibways in Canada and the United States of America probably migrated from the East during the Ice Age. They have developed their own mythologies and culture.  The Ojibway people believe that every thing on earth is connected.  In one of their mythologies, their elders had a good life when they lived in harmony with plants, animals and all living beings. Bad days followed when they began to fight due to jealousy, hatred, fear and anger. They believe that all humans are one and they are separated only by tongues. In one of their their prayer, Ojibway people ask: Sacred One/Teach love, compassion, and honor/That we may heal the earth/And heal each other. This is all about harmony. In one of their hymns, titled Grandfather Story, the Ojibways people say that this  harmony has been broken. They ask Grandfather, a word that refers to God,  to look at the brokenness. They lament that among creatures; only human family has strayed from the Sacred Way. In other words, only humans are divided.

The Government of Canada through its legislations, projects and fundings are strengthening the links for harmony among different cultural groups.  Canada is promoting harmony through all levels of governments to strengthen multicultural policies. Canada understands that harmony is the road to live and let live. Live and let live is the gospel that  Canada  propagates. A native nation of Canada has been believing in this philosophy for centuries. This is the way to survive and prosper in the complex world of violence of today; this is what the global village needs and this is what Mahatma Gandhi taught and practiced. Moreover, this is the gospel in which I believe and write about in my poetry and prose.

Violence begins in the minds of people and this is the area to be focused.   It is time to recognize and study the advocates who believe that peace can be achieved through peaceful means.  Among these advocates, the names of  Mahatma Gandhi, Martin Luther King, Jr., Nelson Mandella, Aung San Suv Kyi from Burma and a host of others can be included. Before these sources of nonviolence,   there was Jesus Christ and Gotama Buddha. These advocates   of today have been influenced by the sources before them and have learnt from one another. They have been proud to confess their influences.   Mohandas Gandhi was influenced by the ideas of Leo Tolstoy about nonresistance that are based on the Sermon on the Mount. Gandhi acknowledged that Jesus was the most active nonviolent practitioner in the history of the world.  Martin Luther King Jr., was influenced by Gandhi and the story can go on.  They adopt the ideology of nonviolence according to the environment of their countries.

Pope John Paul 11  said in 1982 on the Day of Peace that war is “the least effective way of resolving conflicts.”  His successor, Pope Benedict XV1, said on September 12, 2006 at the University of Regensburg in Germany that “violence is incompatible with the nature of God and the nature of the soul.”  On April 3, 1968, the night before Martin Luther King Jr. was assassinated; he addressed a crowd at the Mason Temple in Memphis, Tennessee, where he rightly said that the only choice today is between nonviolence and nonexistence. According to Mahatma Karamchand Gandhi, “nonviolence is the law of the human race and is infinitely greater than and superior to brute force.”

Mahatma Gandhi condemned violence, and so did Mr. Pearson, a child of Canada, a Nobel Laureate for Peace.  Mr. Pearson had seen the ugly head of violence in the war. He suggests in Democracy in World Politics: “So we must continue the hard and often seemingly hopeless task of trying to convince those who have made a creed of violence that now at last violence cannot possibly pay because its end result will be universal destruction.”

This is the time to recognize the sources that advocate   nonviolence, study and analyze   their ways to apply in the global village of today to achieve the peace that is the palpitation of the meaningful prosperity and happiness.

Ansted Poet Laureate Stephen Gill has authored more than twenty books, including novels, literary criticism, and collections of poems. His poetry and prose have appeared in more than one thousand  publications. Multiple award-winning poet Stephen was born in Sialkot, Pakistan, and grew in India. He is the subject of doctoral studies. Ten literary studies  have been released by scholars on his works  and more are under active preparation. He edits an online journal: www.writerslifeline.ca  (Websites: www.stephengill.ca; www.stephengillcriticism.info )