by Jason Setnyk
in 5 questions with..., Arts and Culture, News and Announcements
Reading Time: 3 mins read
47 2 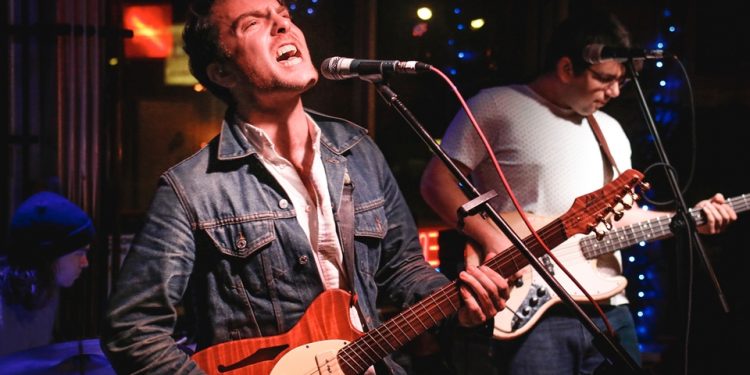 The Elwins are an up and coming band from Keswick Ontario, just north of Toronto, who are making waves across the globe. The band consists of Matthew Sweeney (vocalist/guitarist), Travis Stokl (drummer), Feurd (guitarist/keyboardist), and Frankie Figliomeni (bassist).

The band released their sophomore album “Play for Keeps” in 2015. It was a follow up to their 2012 debut full length “And I thank you”.

This year’s 12-song collection builds atop the foundation of fun pop music they established with its predecessor. “We tried to take everything up to the next level, sonically speaking,” says Feurd. “We wanted to be really open and try a bunch of things we hadn’t done before.”

The hit song “So Down Low” charted for six months and hit #12 for alternative music on Canadian radio. The song was also used in a Canada-wide advertisement campaign for Fido.

The Elwins deliver a dose of dancy bliss that appeals to virtually anyone. “We definitely like making songs that make people want to move,” Sweeney says.

The band has played major festivals and they have shared the stage with noteworthy bands like The National, St. Vincent, The Flaming Lips and X Ambassadors.

The band has toured Canada, the United States, Western Europe, and Japan. Now they are playing Cornwall Ontario on Friday December 4th at Lola’s Pub.

Opening the show is South Carolina grunge rock band Heyrocco. The show starts at 10pm and tickets are $10 at the door.

Here is Jason Setnyk’s interview with drummer Travis Stokl of The Elwins.

5 Questions with The Elwins

1 – Where does your band draw inspiration for music? Explain The Elwins creative process writing songs.
It could be anything really. We all like to laugh so comedy is a big one – Nathan For You, Tim & Eric, Maria Bamford, John Mulaney and so on. Musically we like a lot of old and new stuff which is probably one of our strengths when it comes to songwriting. Cool production in songs will forever be fascinating to us as well as any simple song that’s just a guitar and voice for example.

2 – How does your sophomore album “Play for Keeps” differ from your first full-length album “And I Thank you”?
It’s different from “And I Thank You” in a number of ways for sure. Drums were recorded last which was the exact opposite to what we did on “And I Thank you”. More attention was made to filling out songs sonically. Basically we didn’t want to have any limitations to the recording.

3 – What was it like to have your song “So Down Low” charting for six months and hitting #12 for alternative music on Canadian radio? Also what was it like having that song used in a Canada-wide advertisement campaign for Fido? How was your song selected by Fido?
Having support like that is awesome. Everyday we realize how fortunate we are to receive such love. We’re glad that people are liking it. The FIDO ad has been amazing really, they came to us and we were like “sure! why not!?”. So many people have told us that they’ve heard or seen it. It’s super neat.

4 – You have toured Canada, the United States, Western Europe, and Japan. Are shows in other countries similar or different to shows here in Canada? What have you learned from your touring experiences?
Shows are different in some places, yes. Overseas more often than not the audience will sing along to the songs. Like almost everyone will. It’s sweet! From touring around a lot we’ve learnt that in general people are very hospitable. We can’t wait to go to more places and experience their culture and what not.

5 – What can Cornwall music fans expect from your live show? Anything you want to tell the people of Cornwall Ontario about your upcoming gig?
Cornwall-ians (sorry! it just sounded funny in my head saying it) can expect a super energetic live show from four relatively young gentleman who just happen to have a sweet light show on this tour. If you like colours then you’re in for a real treat.