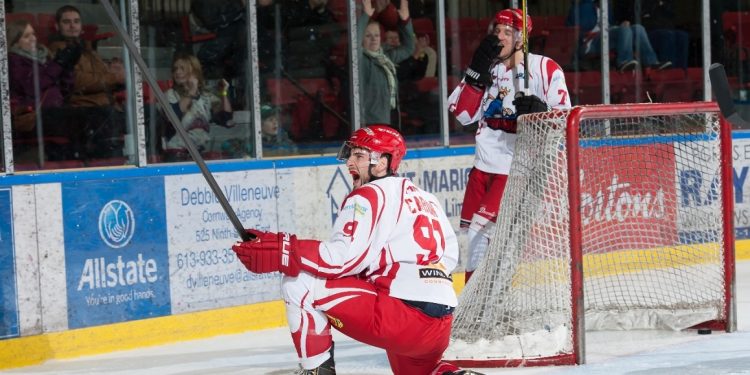 Cornwall Ontario – The Riviere-du-Loup 3L snapped the Cornwall River Kings winning streak on home ice with a 6-3 victory on Saturday night at the Civic Complex in front of 962 fans.

RDL scored four unanswered goals in the third period – two of them empty-netters. Cornwall had won its two previous games on home ice.

Rookie Jean-Christophe Laflamme scored the game-winning goal off a wicked bounce with 6:11 to play in the third period. Laflamme, all alone in front, was at the right place at the right time to beat a helpless Pete Karvouniaris.

Bryce Swan opened the scoring for Riviere-du-Loup with a shorthanded goal at 13:54 of the first. Swan one-timed a pass from 3L captain Sylvain Deschatelets past a sprawling Karvouniaris.

Maxime Villemaire extended Riviere-du-Loup’s lead early in the second with a breakaway goal 3:25 into the period.

The speedy J.P. Caron banged in a rebound to put the River Kings on the board at 13:23 of the second. Then, with 3:17 to play in the middle frame, Nicolas Larocque-Marcoux was left unattended in front and his tap-in goal leveled the score.

Moments later, Sy Nutkevitch sprung loose on a breakaway and beat Travis Fullerton to give Cornwall its first lead of the night with 2:25 to play in the second.

The 3L took over in the third, however.

RDL struck early in the third on a goal by Etienne Archambault , who one-timed a Chad Lacasse feed past Karvouniaris only 13 seconds in.

After the Laflamme marker, Swan, with his second of the game, and Marc-Andre Tourigny added the empty-net goals in the final 67 seconds of play.

The River Kings have a home-and-home series with the defending champion Thetford Assurancia next weekend. Cornwall travels to Thetford on Friday (8:30 p.m.) and the two teams meet the following night at the Civic Complex (Saturday, Dec. 5) at 7:30 p.m.