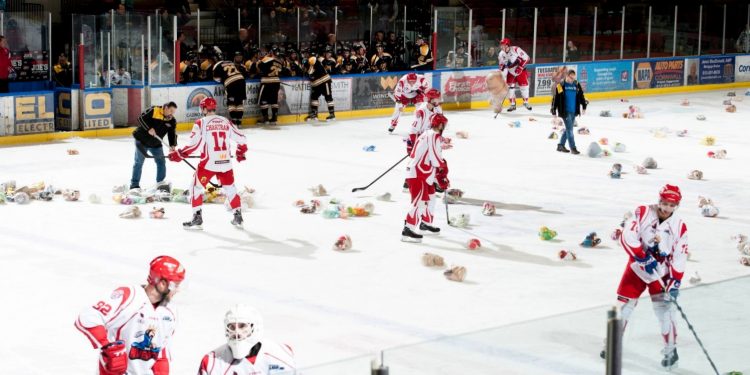 Cornwall Ontario – The third annual Teddy Toss was a huge success on Saturday night at the Civic Complex as River Kings fans tossed 1,114 Teddy Bears onto the ice. The team also raised more than $500 in the annual Sparky’s Toy Drive.

Cornwall, despite a great third-period comeback, dropped the contest 5-4 in overtime at the hands of the St-Georges Cool FM in front of 901 fans. Kevin Cloutier’s blast from the high slot 1:28 into 3-on-3 overtime was the game winner.

The River Kings, who trailed St-Georges 4-2 after 40 minutes, got third-period goals from Michael Stinziani and Nicolas Pard to earn the team a point and send the game to the extra session.

Stinziani picked the top corner with 7:34 to play when he beat Hubert Morin before Pard batted in a cross-crease pass to tie the game for Cornwall with 3:34 to play.

Eric Bertrand opened the scoring for St-Georges when he beat Pete Karvouniaris five-hole at 8:34 of the first.
Then, Nicolas Larocque-Marcoux came through for the River Kings, scoring the Teddy Toss goal at 12:18 of the first. Marcoux buried a feed from David Croteau and fans flooded the ice with teddy bears.

Bertrand scored his second of the contest on the powerplay with 48 seconds to play in the first. Pierre-Luc Faubert leveled the score 1:54 into the second with a powerplay goal of his own.

Then, Francis Charette beat Karvouniaris twice before the end of the middle frame to give St-Georges a 4-2 lead after two periods.

Shots on goal were 28-28. Charette (first), Bertrand (second) and Faubert were the announced stars.