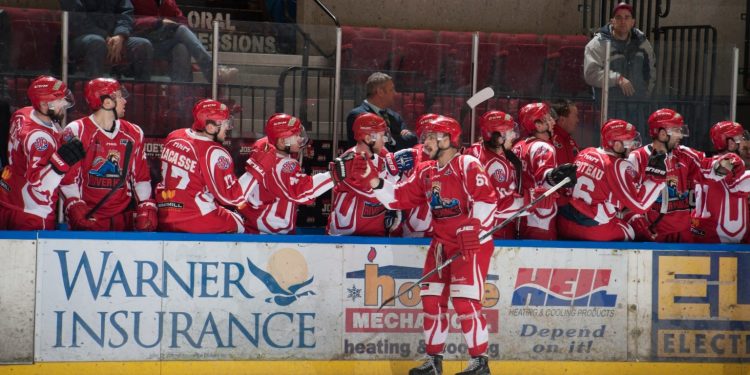 Cornwall Ontario – With the victory, Cornwall improved to 5-7-2 on home ice this season. The hard-hitting contest was played in front of a gathering of 702 fans.

After Charles Lavigne made a huge save in the 3-on-3 extra session, Fazekas took off with the rebound and buried his first goal of the season for the game winner.

With Cornwall trailing 5-4 in the third, Francois Ouimet scored his second of the contest with 8:42 to play to level the score.

David Croteau opened the scoring for Cornwall with a powerplay goal 1:34 into the contest.

Sixteen seconds after Nicolas Blanchard leveled the score for St-Georges at 4:29, Maxime Vachon scored his first goal for the River Kings when he cashed in on a perfect feed from Antony Courcelles. The goal chased Hubert Morin from the St-Georges crease.

Simon Demers’ one-timer beat Pete Karvouniaris, who started the game in goal for Cornwall, at 9:53 to once again tie the game before David Poulin beat Karvouniaris with a squeaker from the point at 14:54.

Cornwall tied it up 14 seconds later when St-Georges defenceman Pierre-Luc Bouchard scored on his own net when attempting a pass. Sy Nutkevitch was credited with the goal.

Moments later, leading scorer Ouimet gave Cornwall a 4-3 lead when he beat Pier-Olivier Pelletier between the legs at 16:06. Ouimet had another opportunity to beat Pelletier, but was denied on a penalty shot with 3:11 to play in the wild first period.

Blanchard’s second of the game 2:25 into the second period pulled Karvouniaris in favour of Lavigne. St-Georges capitalized on a River Kings turnover to take a 5-4 lead on a goal by Kevin Cloutier with 4:39 to play in the middle frame.

Cornwall’s Colin Rice challenged Yannick Dallaire and the River Kings Curtis Tidball took on Kevin Cormier in the first. Local defenceman Ryan Sullivan had a heated battle with Bouchard in the second.