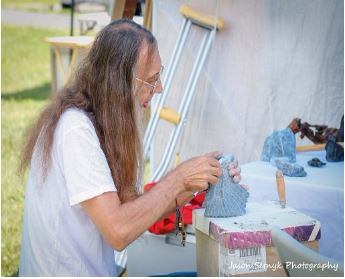 I decided to intervi ew Moïse Lasata when I visited TAG in January. I was intrigued by his commitment to the gallery despite the problems of this establishment. I wondered what type of artist persists in such adversity by devoting hours of his time and talent to keep TAG open to the public. I asked him how he felt about the turn of events at TAG. “Frustrated mostly, because it’s such a waste of opportunity” was his reply.  MoÏse was born in Timmins Ontario and later lived and worked in Mattagami Quebec. From his early years he loved to draw, an activity, which often got him into trouble for not paying attention during class. A shy and sensitive student, he found sanctuary in his artistic expressions. Despite many challenges his love for art, , never wavered.

During the interview, I discovered his love for his two daughters, Michelle and Amy whose exploits he follows with pride.

Though self-taught, Moïse’s artistic communication is varied. He produced a CD of his poetry and songs under the label “The Car” and generously plays guitar at meetings and gatherings. When asked to describe his visual art, he refers to artists such as *Goya and Dali. He admires Michelangelo for his superb sculptures.

At the TAG, one can appreciate his body of work “Atrocities of Man” where the inspirati on of Goya’s later works resonate. On five canvases, he illustrates in a dark and complex style, the impact of war today. He has difficulty reconciling the cruelty and lack of respect in society with the values to which he adheres. To counteract the bombardment of negativity he composes songs and poetry. His installation: “Drums and Chimes” reflects a zone of calm and meditation he creates for himself.

Moïse has been a member of Focus Art since he arrived in Cornwall two and a half years ago. He actively participates in community events such as the International Ploughing Match 2015 in Finch, Foodfest, Ribfest, the Garlic Festival, La semaine française and most art exhibitions in the area.

He hopes to be remembered as someone who sought peace beyond violence and adversity. His summary of ART is: Art Revealing Truth.

For more images of his work visit him on Facebook.

* Francisco Goya 1746- 1828 also used his art to record moments of the country’s history. In 1808, France, led by Napoleon Bonaparte, invaded Spain. Napoleon installed his brother Joseph as the country’s new leader. While he remained a court painter under Napoleon, Goya created a series of etchings depicting the horrors of war. After Spanish royalty regained the throne in 1814, he then painted “The Third of May,” which showed to the true human costs of war. Goya seemed to illustrate the absurdity of the times. 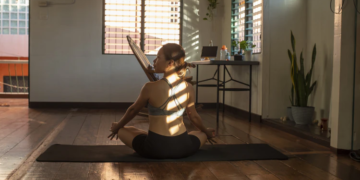