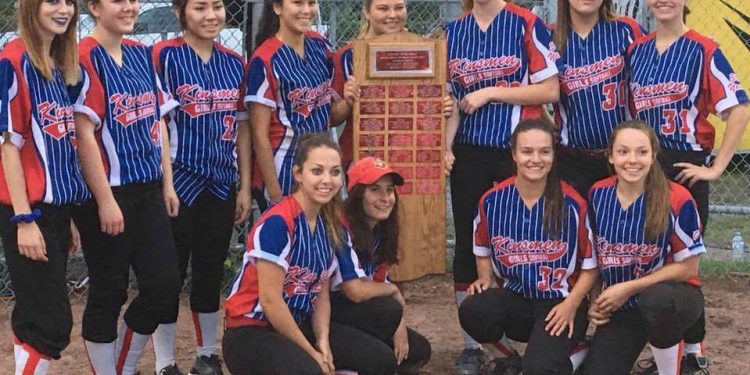 “Winning isn’t everything but when you play with people that make the win feel more than a win it feels heart warming. In the first inning we were losing 3-0. After that we picked ourselves up and played out hearts out and I think that’s why really matters,” said third base player Taylor Rudowski who recently graduated from St. Lawrence High School.

According to Rudowski commitment to the game is what contributed to the victory Sunday for the Jay’s Kinsmen Girls Softball team.

“The tournament had me nervous, but I knew in the end if we played our hearts out we would win like the great team we are. Winning tonights game wasn’t easy, but we tried our best and we made it. Commitment is what you need in every team and we brought all of our commitment to the field tonight. That’s what led to winning tonight,” Taylor Rudowski explained.

Being on team means building friendships and creating memories, and that is exactly what happened over the course of the season for the Jays Kinsmen Girls Softball team.

“Our team was full of laughs, corrections, dedication, hard work and fun. We made the best of it even if we lost games. Without these things we wouldn’t of been where we were tonight or in fact we wouldn’t of been a team. I wouldn’t trade my memories with my team or trade my team for anything else. I’m grateful for my team and my coach,” Taylor Rudowski added.

It was an emotional experience for center fielder Krisey Prieur who played her final game with the Jays Kinsmen Girls Softball team on Sunday.

“Kinsmen Girls Softball wasn’t just a place I went because I loved playing the game. I love the people there as well, and it feels almost like family. And the memories I made at the field with everyone are absolutely unforgettable! I’m going to miss Kinsmen Girls Softball. Everyone that puts their effort into this organization, thank you for making it happen! I don’t know what I would have done without softball. I love you all, thank you so much for the opportunity to make memories with all the lovely ladies I have met along this journey,” Krisey Prieur concluded.

Congratulations to the Jays 2016 Kinsmen Girls softball team on a season well played! For more information on the team visit their Facebook page.