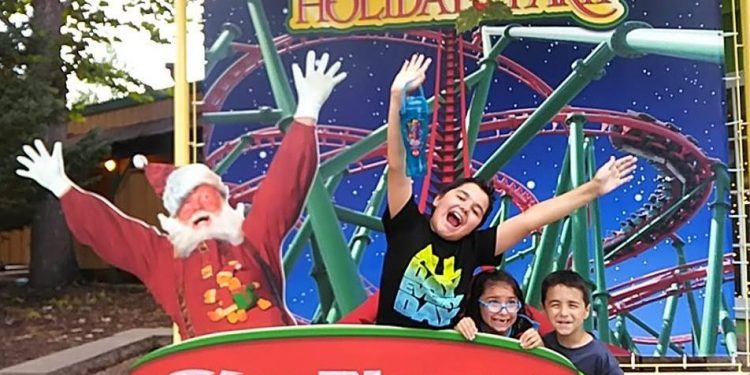 You would think that all Six Flags are created equal, but that’s not the case.

Like with everything, the parks seem to be adapted to their environment and location.  For example, in Texas, you will find some good BBQ Brisket whereas in Montreal, you’ll find awesome poutine.  The rides also tend to cater to the specific demographic or the area.

Initially, we were going to review 7 parks including Atlanta and Washington. We quickly discovered that many of the parks located south of New Jersey are opened only week-ends after mid-August.  Living in Ontario, where schools start the first week of September, it didn’t even occur to us that parks may close during the week where school starts earlier, therefore, we needed to adjust our itinerary. This is something you definitely want to pay close attention to if traveling anytime in August.

Here is our evaluation of the parks we visited.

Awesome huge park with some 54 rides, many roller coasters and plenty to do for the smaller kids. The park was clean, offered a good choice of food and the portions were humongous. , The pulled pork sandwich was somewhat dry, but the Johnny Rockets burgers made up for it. Snacks included big pretzels and cotton candy that were 3 times the size of those we usually get in Montreal.

Where usually, the gold pass selections on the menu are easy to spot, at this park, it was difficult to figure out. We had an incident with guest services who told us our meal passes had been voided by our home park, which turned out to be completely false and created problems that were non existent, making us waste 40 minutes.  Wait times were not too long, most rides were open. Nice options for drinks too at the Coca-Cola freestyle booth, which included vitamin water and fizzy water. When you are watching your calories, that’s pretty swell.

Best coasters were the Superman and the Xflight.

Great selection of food, including healthy options such as salads and wraps. There was a wide variety of snacks including funnel cakes and ice cream.  St. Louis is a smaller theme park with only 34 rides and it was a shame that at least 6 of them were closed.  But the good thing is that we visited on a cloudy day that was supposed to turn out into thunder showers, therefore the lines were practically non existent.  It turned out to be a beautiful day and the rain showed up after the park closed.  Best coasters there were Batman the ride and Mr. Freeze reverse blast.

One minus: the height requirements displays were not clear at all.  In most six flags, they are visually indicated with red, yellow and green measuring device, easy for kids to walk up to and figure out if they are allowed in or not.. There, they use silver rulers, so you have to find the height requirement in inches on the signs somewhere, then measure your child on the silver ruler, where numbers are quite hard to read. Not optimal…

Also, they did not allow anybody to bring anything on the rides. I usually carry my backpack with me and leave it, along with my flip flops, on the side of the attraction, then retrieve at the end of the ride.  But there, they won’t let you.  Most parks have bottle carriers and bins where to store your items, to accommodate riders, but not in St. Louis. I had to sit on my flip flops in Batman: the ride.  Kind of a silly rule, very impractical for families who have to carry stuff with them.

Dallas Is a nice big Park with 48 rides. The restaurant selection was not as large as in other parks but the variety of food was awesome. We could get milkshakes at Johnny Rockets and funnel cakes and the portions couldn’t fit in your plate. The Fresh Cafe,  unfortunately, was closed both times we visited, but there was a few places offering healthier food options such as grilled chicken salads.   And the BBQ– You know you’re in Texas when–was absolutely delicious. The freestyle station, one in the entire park, was closed, which meant no healthy drink option. \nWe visited on a very, very hot day which meant long lines at the Restaurant, but decent time at the rides. People were hiding in the air conditioning.

There was a nice selection of moderate thrill rides for children that are between 42 and 48 inches tall.

My husband’s home town, one we’ve visited countless times in our travels, one I had great expectations for. \nThe rides at Fiesta Texas are great. There is a good variety and plenty for everybody to enjoy so my complaint doesn’t come from the rides or the cleanliness of the park, or the friendliness of the staff, it’s about the food! I mean come on!  Isn’t everything supposed to be bigger in Texas?

The first day we visited, we realized that the portions of food given had been cut down to approximately half of what we got when we visited in December.  The funnel cake I ordered given as a snack was old and had been sitting there for a while. It was better on the second day, but still. The snacks were small, the popcorn was cold, the freestyle machines were constantly out of ice.

Nonetheless, Fiesta Texas is loads of fun. The fact the water park is included with gate entry is definitely a plus. Notable rides : Iron Rattler, Superman, Batman and for the little ones, the Road Runner, the Pandemonium and the iconic Scooby Doo Ghostblasters.

I have to say that the Iron Rattler is probably one of the most fun roller coasters I’ve ever been on.

Absolutely without doubt the most awesome Six Flags in this list. Some 57 attractions with the Mother of all Coasters : The Kinda Ka. This 456 foot high coaster track will take you from 0 to 205KM an hour in a matter of 3.5 seconds.  Also notable, the Zumanjaro, drop of doom, that will drop you from 415 feet high. Other favourites: The Superman, The Nitro, The Batman.

One thing that could use improvement at this park is, unfortunately, customer service. Oh, and a word of caution: if you order anything you see on promotional posters with your food passes, make sure they are giving you JUST what’s included in the deal… They can have a tendency of adding options that make the price go up, then charge an extra.

The Six Flags Great Escape was everything but great. It was disappointing.  The park is fine for younger kids but for thrill seekers, which even my youngest is, it’s a let down.  There are only a few roller coasters and not one worth mentioning.  One plus is that the waterpark, Splashwater Kingdom,  is included with entrance.

We are lucky to have one of the best Six Flags right near. I have to admit that I am bias when it comes to La Ronde, partly because I grew up visiting this park so it is close to my heart.

Nonetheless, La Ronde stands on its own merit, with a whooping 45 rides, including many thrill seeker options.

The food option are varied and include Poutine, Thai Food and Sushi (yes, that’s right, SUSHI!) The portions are plentiful, but the snacks tend to be small.

Notable rides are: The Vampire, The Demon, The Goliath and the Ednor.

Don’t miss part 3, next week, as we compare cities and tourism boards.