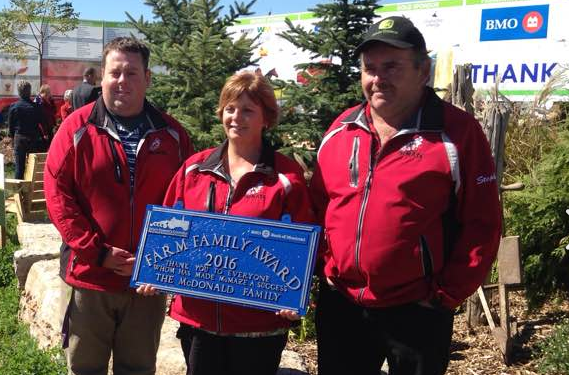 On Saturday September 26th, 2016, the McDonald family of McMaze was presented with the BMO Farm Family Award. The distinction was presented at this year’s rendition of the International Plowing Match and Rural Expo 2016, in Minto, Ontario.

The McDonalds were one of 10 families recognized by the BMO this year. The award is presented to farming families for various topics including rural-urban relationships, volunteerism, community focus, advancement in agricultural technology, family involvement and farming practices. The award has been presented annually to 10 families in Ontario since its inauguration in 2012.

The McDonald family was nominated this year to be a recipient of the Farm Family Award. Over 80 nominations were made to the Ontario Plowmen’s Association where 10 were selected from a committee, representing various counties across the province.

The McDonald’s farm 100 plus history, combined with their innovative technology, education programs and widely popular agritourism business; McMaze, were all items looked at in the selection process, making them one of this year’s Farm Family.

The McDonalds were presented with a gate plaque at the ceremony held on the Centre stage at the IPM.

The award is in partnership with the Bank of Montreal and the Ontario Plowmen’s Association, which is host to the International Plowing Match.

Interview with The Small Glories Cara Luft and JD Edwards