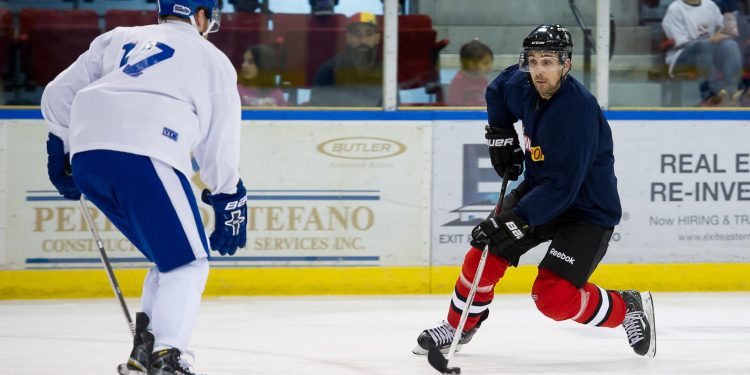 CORNWALL – Austin Daae scored his third goal of the game with 41 seconds to play in overtime to lead the Watertown Wolves to a come-from-behind, 8-7 victory over the Cornwall Nationals at the Civic Complex.

Despite the tough loss on home ice, the Nationals and Federal Hockey League made a great first impression on Saturday night. The three-on-three overtime put a nice cap on an exciting evening of hockey.

Cornwall jumped out to a 5-0 lead in the contest, but the Wolves fought back with a shortened bench for a gutsy victory in front of 786 fans.

Alexandria’s Joel Trottier opened the scoring 12 seconds into the contest with an absolute blast that beat Alex Vazano. Trottier then added his second at 9:44 of the first with a nifty deke to his backhand.

Sylvester Bzdyl and Justin Rutley scored goals 17 seconds apart late in the first to give Cornwall a 4-0 lead. Then, Anthony Mezzagno beat Vazano top shelf for a powerplay marker at 17:17 of the opening frame.

But, Austin Daae beat Cornwall’s Brandon Billie with a powerplay goal of his own with 56.6 seconds to play in an entertaining first. The comeback was on.

Daae scored his second of the contest 1:57 into the middle frame and John Schivao scored 24 seconds later. Then, moments after Nicolas Dilabio replaced Billie in the Cornwall crease, Schivao buried his second of the game at 11:17 of the second to make it a one-goal game.

MJ Graham banked a shot off a Watertown defenceman’s skate and in at 3:19 of the third to stop the bleeding for Cornwall.

But, with the teams skating four-on-four, Dustin Jessau brought Watertown back to within a goal when he beat Dilabio at 7:39 of the third.

Cornwall native Jeff Legue beat Ed Zodolshek with a gorgeous wrist shot upstairs at 9:52 of the third. Sixty-five seconds later, however, Jeremy Akeson brought the Wolves back to within a goal once again.

Then, with 7:56 to play, Schiavo netted his third of the evening to level the score at 7-7.

While the FHL isn’t known for fisticuffs, stay-at-home defenceman Kris McCarthy dropped the mitts with Shane Halaas in a spirited first-period scrap.

Daae (first), Legue (second) and Dickenson, with three assists, were the announced stars.

The game was delayed 30 minutes as the Wolves were held up at customs prior to the contest. Four Russians and a Belarusian didn’t have working visas to cross, leaving Watertown with a short bench in the contest.

The Nationals inaugural home opener is Sunday, Oct. 30 at 1 p.m. vs. the Danville Dashers.

ROAD LOSS: On Friday night in Watertown, the Wolves doubled up the Nationals 6-3. Joseph Tadiello had a natural hat-trick for Cornwall in the second period. Marley Keca and Joel Trottier picked up a pair of assists each for the Nationals.