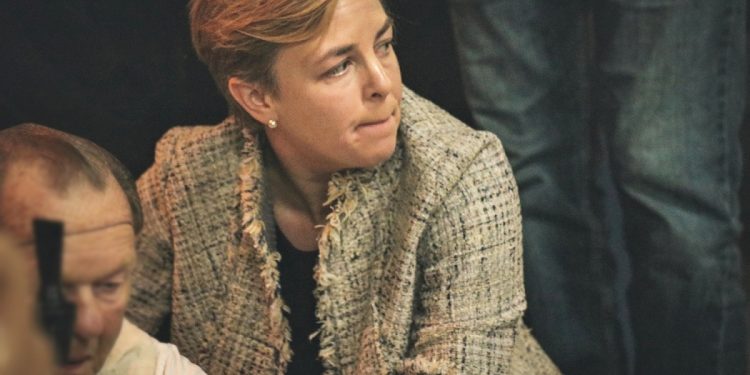 Cornwall Ontario – Is there a Conservative doctor in the house? When MP Kellie Leitch arrived in Cornwall this morning for a Conservative Leadership Breakfast, she was planning to give a speech and meet party members, not offer medical services.

After a kitchen staff employee at the Royal Canadian Legion collapsed and fell to the ground, Leitch quickly got up from her seat to aid the man.

The orthopaedic paediatric surgeon announced, “I’m a doctor”, as she moved through a crowd of people, and knelt beside the man to check his condition.

A few minutes later the man was able to sit up and eventually he was able to stand on his own accord. An organizer asked if an ambulance needed to be called, but Leitch indicated that would not be necessary.

“He just tripped, I just made sure he was okay. He’s fine”, said Kellie Leitch who downplayed the event.

Her campaign slogan is “working hard, helping others’, and that is exactly what Leitch did at the Conservative Leadership Breakfast this morning.

Kellie Leitch was first elected in 2011 and appointed Parliamentary Secretary to the Minister of Human Resources. Later Prime Minister Harper named her Minister of Labour and Minister for the Status of Women. She served in the Conservative Cabinet until the party’s defeat in the 2015 Federal Election.

In April of 2016 she announced her candidacy for Party Leadership.

She has come under scrutiny for her definition of Canadian values and her vision for immigration policies.

“I don’t care what some media elite are saying, I want to make sure the average Canadian is being heard”, Leitch said to the Cornwall audience.

She also spoke about government spending.

“I believe the government should get their hands out of both of your pockets, and that you have a better idea how to spend your money than the government”, Leitch added to the applause of those in attendance.

She was one of six leadership hopefuls in attendance today.