Guyon does the trick in Nats victory

by Editorial Board
in Sports
Reading Time: 2 mins read
26 2 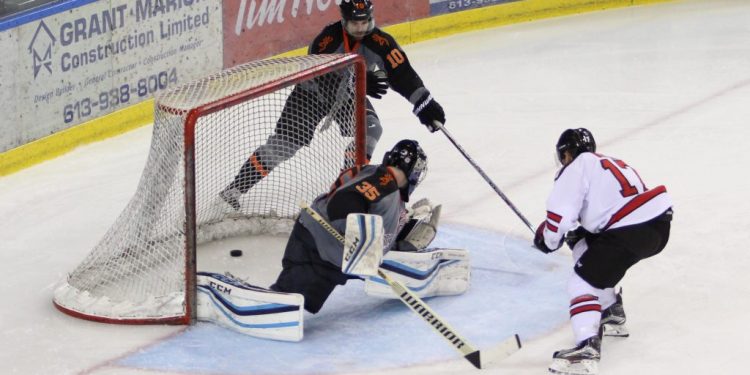 Brandon Gilmour opened the scoring for the Nationals 5:06 into the contest with an absolute blast from the faceoff circle to beat Danville goaltender Gregory Hussey.

Sylvester Bzdyl gave Cornwall a 2-0 at 10:34 of the first. With the Nationals on the powerplay, captain Ahmed Mahfouz found Bzdyl all alone on the doorstep for the tap-in.

Twenty-eight seconds later, however, Danville’s Justin Brausen beat Tyler Beskorowany, who was making his debut in goal for the Nationals. Beskorowany was a second-round draft pick of the Dallas Stars in 2008.

With 4:52 to play in the first, Maxime Guyon snapped a quick shot from the slot past Brausento give Cornwall a 3-1 lead.

Guyon then added his second of the game with a highlight reel goal 4:26 into the second. With the Nationals shorthanded, Guyon stole the puck at the goal line and deked Hussey to give Cornwall a 4-1 lead.

But, 53 seconds later, Brausen scored his second of the night to bring the Dashers back to within two.

Nationals defenceman Cam Bakker banged in his own rebound for a powerplay goal with 4:37 to play in the second. The goal chased Hussey from the crease in favour of Aaron Taylor.

Cornwall defenceman Patrick Harrison one-timed an Eric Witzel pass by Taylor only 56 seconds into the third to give the Nationals a 6-2 lead.

Danville, on the powerplay mid-way through the third, pulled its goalie for a 6-on-4 advantage but Guyon tipped a Witzel shot into the empty net for his third of the contest at 8:05 of the final frame to give Cornwall a 7-2 lead.

But, the Dashers would respond moments later on an Andrew Harrison marker at 9:27 of the third. Then, with 8:01 to go, Brausen tipped in a shot from the point for his third of the game, a powerplay marker.

Brandon Vuic iced the victory for the Nationals with an empty netter with 2:30 to go.

The two teams are right back in action on Sunday afternoon at the Civic Complex in the annual Teddy Bear Toss game. Fans are invited to bring a new or gently used teddy bear to throw on the ice following the Nationals first goal.