Interview with A Vulture Wake and ALL vocalist Chad Price 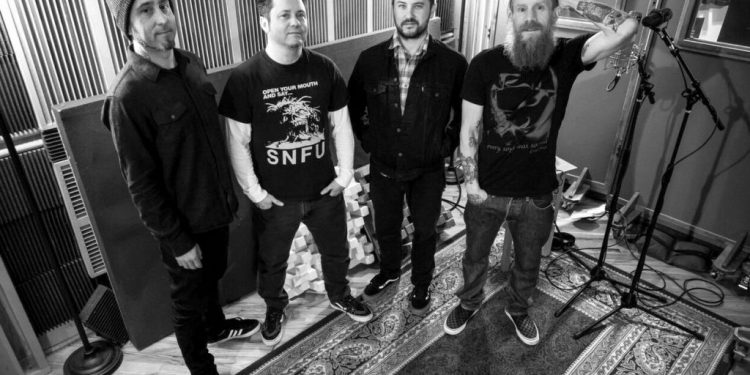 They are releasing their debut album ‘The Appropriate Level of Outrage’ on January 31st, 2018 via Bird Attack Records. Garrett Wadford, owner of Bird Attack, was the first to take notice of the band.

“Brandon knew the label from a previous band he was in. We had sent songs around to a few different labels and hadn’t really gotten the response we were looking for. Garrett at Bird Attack was the first person that truly seemed stoked and you definitely want the label to be stoked. Or you could easily disappear,” Chad Price explained.

A Vulture Wake recorded their first 10 song full-length album in January 2017. What is Chad Price’s favourite song off the new album?

“Impossible for me to answer. They are ALL my babies. They ALL have something killer to offer,” Chad Price said perhaps making an allusion to his other punk band ALL.

‘The Appropriate Level of Outrage’ was recorded at the infamous Blasting Room in Fort Collins, Colorado.

“Everyone that works at the Blasting Room is killer. Andrew Berlin engineered and Jason Livermore mixed,” Chad Price stated.

Record producer and ALL band mate Bill Stevenson was not at the Blasting Room for the A Vulture Wake recording session.

“We did not work with Bill on this record. For one thing The Descendents were busy at the time,” Chad Price said.

According to a release, the band formed in early 2016 when Brandon sent several instrumental demos to Chad and asked if he would be interested in starting a new band with himself and Sean. Chad started working on melodies and lyrics almost immediately. Needing a bass player Sean reached out to longtime friend and former band mate in The Real McKenzies, Joe Raposo. Joe was in without even hearing a note. Over the next few months, demos were emailed back and forth, refinements were made and in May 2016 Chad, Sean and Joe traveled to Brandon’s home in Amarillo, Texas where they played the songs together for the first time. 2 days later they recorded a 10-song demo and began working on booking shows.

Chad Price describes how he joined A Vulture Wake.

“Brandon had a bunch of songs just waiting to be rocked. He and Sean were already playing together so they asked me if I was interested and I was. They asked Joe a little later on once we knew we had something killer going. All buddies just rockin’ and having a no drama good time,” Chad Price recalled.

Chad Price explains the origins of the name A Vulture Wake.

“The name came from a long list we all threw together. I thought it was the coolest sounding and meaning. We’re here to ingest all the bullshit so maybe you don’t have to,” Chad Price explained.

What does their music sound like? Their music is best described as honest, energetic, passionate, and at times technical punk rock with the songs always maintaining a strong sense of melody.

Chad Price describes what it’s like being in a band with Joe Raposo, Sean Sellers, and Brandon D. Landelius.

“All 3 dudes are pretty much at the top of their game. They definitely push each other to write better, faster, more f-cked up stuff,” Chad Price disclosed.

The band has already played some shows. A Vulture Wake has played concerts with bands likes of 7 Seconds, Strung Out, Pulley and more.

“Playing with these dudes is killer no matter what, but there’s always something special about your first time,” Chad Price reminisced.

Is your other band Drag the River officially retired?

“Not officially. I just needed a break for a while and I wanted to put ALL my energy into this band. I truly believe in this band,” Chad Price said.

Are you still touring with All and splitting time between the two bands or will you be focusing mainly on A Vulture Wake in 2018?

“It’s the year Of The Vulture,” Chad Price concluded.

A Vulture Wake’s new album will be followed by an EP in the Spring 2018. Pre-orders will launch in early January.

Will Cryptocurrencies Ever Take Over?