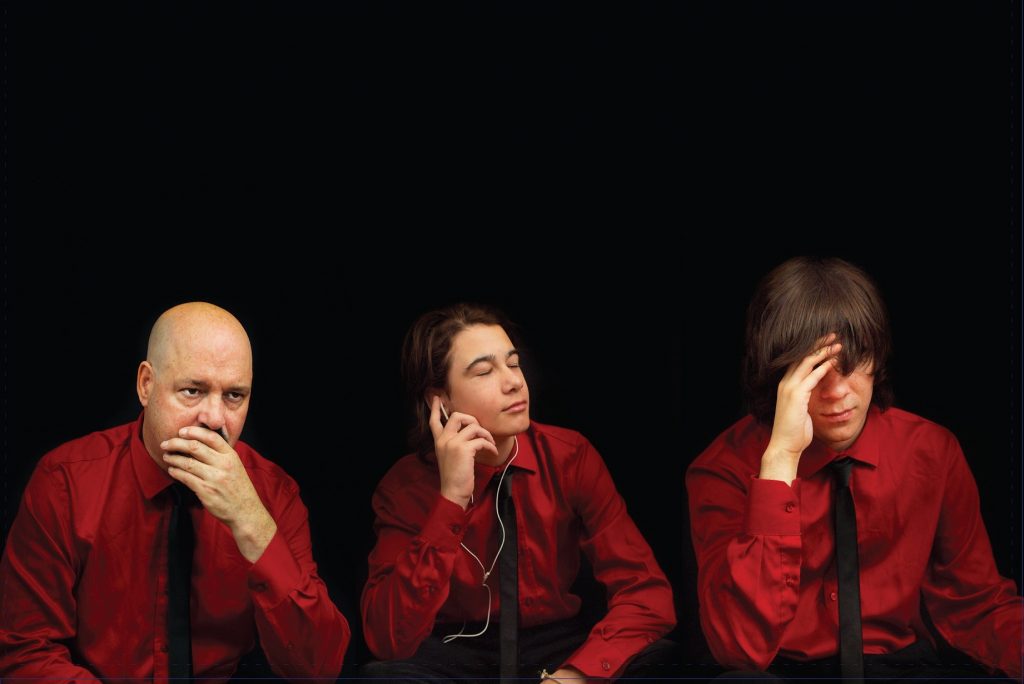 What makes The Discarded unique is that it’s a family affair. The band features a father and his two sons. Rock dad J.P Wasson, who is the drummer for Fifth Column and The Snowdogs, sings and plays guitar for The Discarded. While 17 year old Jared Dean plays bass, and his 14 year old brother Caden Jax plays drums.

The Discarded formed in 2016 after Wasson’s separation and divorce.

“In January of 2016, the three of us found ourselves living together after my separation/divorce. We used to do little fun jams just making noise with the instruments I had on hand, but at this point Jared had gotten a bass and wanted to give it a serious go. Caden had gotten his first proper full size drum set the October before as well. So a friend was having this birthday party with some bands and a member of the band I was in couldn’t make it so I suggested I could do a few songs with Caden and Jared. I think we were even billed as JP and the kids. Since they were new at their instruments we learned four very basic songs. Crybaby, Time bomb heart and Ballad of a broken man (all of which are on our first record and we still play to this day) and Blitzkerg Bop. That show was received very well so then we did a few more and we learned a few more songs,” Wasson mused.

The best way to describe The Discarded’s sound is a raw garage punk reminisced of bands like The Cramps and of course The Ramones.

“We had this raw, Cramps/Ramones, garage rock sound. I thought it would be cool and fun if we did a recording of it just to capture that moment in time. I’ve seen the Ramones 8 or 9 times when they were around and Caden learned to play drums by drumming along to Bad Music for Bad people by the Cramps. The two of them listened to Ramones since they were little kids as music that was played. We didn’t play kids music around the house. Jared picked a Supersuckers song for his fifth birthday to be the musical chairs song. So what else? They like classic rock- guitars and bass and drums, stuff that rocks. Stooges, Sex Pistols, Black Sabbath, Buzzcocks, Stiff Little Fingers. Caden likes Green Day, Zeppelin, Nazareth, like the drumming in Slip Knot and Neil Peart. Jared has gone through different phases but has a classic rock thing that he likes with the Who, The Stones, The Beatles. He’s big into Sloan and likes a Toronto band we played with called Locomotive 8. I try not to say I only like one style of music but I tend to like real people playing real instruments. I like energetic punk, I like Johnny Cash. So you have your likes and that gets filtered through you and in this band it comes out sounding like we sound. Which is a bit of ’70’s punk sound, Ramones and such. We like the energy of it and the sound of distorted guitars and pounding drums,” Wasson responded.

J.P Wasson loves the experience of playing with Jared Dean and Caden Jax in The Discarded. Simply put, he is a proud father.

“I love playing with Jared and Caden. It’s been the most wonderful music experience of my life (And I’ve done this for over thirty years in a number of bands.) For one thing there is proud dad watching them do this and excel at it, getting better at their instruments but bringing the energy and heavy feel to the songs. Plus they get it, I have an idea and they are on it and we are making it into a song. I’ve brought ideas and songs to them that I had brought to a previous band and they were able to get it- the groove and the feel that my other band couldn’t. I said going into this with them- I’m going to treat you like peers and have the same expectations of you as I would in any band I’ve played in which is be focused and try every time. Learn your parts and try and play and put on the best show we possibly can. We have a great time doing this and if you’ve ever played in a band and created a cool sound together you know what I mean. The fact that these are my kids is all the more cooler,” Wasson explained.

His sons bring a great deal of energy to the band – and the dynamic has been great.

“The band is the three of us together – change any element and the band changes. They bring a great energy to the band- this is all very exciting to them so their expectation is not unrealistic and all seem very cool and fun. Caden brings some fantastic drumming and energy to the band. Jared bring a great creativity to the band with well thought out bass lines that add to songs and give a whole dynamic that wasn’t there when I wrote it, a counter melody to my chords and singing. Finally there’s the great dynamic that outside the band , we’re family and we love one another and this is a blast doing this. Plus both of them have their own humor and can give a 15 or 19 year old perspective on it all. Finally we keep each other in check about getting a big head,” Wasson added.

The Discarded’s new album “Manifesto” was recorded at Ian Blurton’s Pro Gold Studio and the album was released via Rock Bottom Records on February 24th, 2018.

On the new record they throw down the gauntlet lyrically about the world they live in and how they think it should be. All over a soundscape of blitzkerg drumming, distorted ‘70’s punk guitar and intricate bass playing.

J.P Wasson has worked with Ian Blurton before – so the two have an excellent rapport together.

“Ian is fantastic. We played together in a band called Big Daddy Cumbuckets in 1987 time period. And I drove on a few tours for his band, Change of Heart. We used to hang out a lot around that time and have many longtime friends in common. Our lives took us in different directions, so day to day we don’t hang out now but there is an easy communication and familiarity. I’d done a recording with my last band with Ian and it was the best recording I’d ever done. The sounds he got – the balance of the different instruments, how it hangs together overall was great. He knows his stuff- he knows his studio and he is excellent at getting good sounds and an overall band sound. And it’s Ian -f*cking – Blurton. He’s into this type of music. He understands where you’re coming from and what you want to get. Plus the way we wanted to record this album- I know Ian could do that- in fact he may have even suggested it. Ian made that possible and it was nice to expose Jared and Caden to the real deal and a good person. He’s kind and supportive and looked them in the eyes and treated them like people and not as kids. Because he was 15 when he started playing and so was I and we remember. You have ideas and world views and don’t need some old guy putting you down or copping an attitude. And Ian tells it like it is, he straight to the point and has fantastic ideas because well he’s Ian Blurton,” Wasson stated.

According to J.P Wasson, there is a huge difference between the first album and the second they recorded with Ian Blurton. On their second album, they were really pushed to bring their sound to the new level.

“So yeah it was live off the floor for the beds- no singing but the bass drums and guitar live off the floor. The first album we did the whole thing in nine hours- overdub of second guitar and singing too. We’d do a couple of takes and go- I think that was a good one. And Ian knowing it was the first time in the studio didn’t push it at that point and was amazed Caden was so poised for a 13 year old at the time. He’d seen drummers crumble in the studio when it didn’t go as planned. So after we finished that recording we thought it sounded great so decided to do it all again this past August for this album,” Wasson replied.

“This time Ian pushed us a bit more. We’d go, “that was great!” and he’d be “No, I think you can do it better” or “too fast or not enough energy in that take”. So again, it was live off the floor for the beds and then we did a few bass corrections and guitars the next day. Finally all the singing was done in three hours at the end of the day. But the idea was to capture a very live feel of us playing the songs. Then Ian mixed them over the next month when he had time available and I’d give my notes of what I wanted to hear a bit more of or less- which was very minor as he has a great ear for this thing,” Wasson added.

“I think it’s a great sounding album and that’s because of the guy who recorded it. We’re very proud of what we did and thankful to have a guy like Ian to help capture that for us ,” Wasson explained.

What is your favorite song off the album to play live and why?

“I think that can change with any band as like food if you eat it all the time even if it’s your favorite dish you can get a bit tired of it. But from my perspective I like playing Do you want it now or Toxic Reasons. I like the energy of those two and the interplay between us as musicians in both those songs,” Wasson said.

What can fans expect when they see The Discarded live? Those fortunate enough to see their live show over the past year saw them gel into a rock solid band opening for the like of ‘60’s garage rock icons “The Sonics” or on their summer tour across southern Ontario.

“It’s something for the ages, something to tell your kids about – that time when you saw The Discarded and they were figgin awesome. High energy, blitzkerg tunes one after another. Just when you think you’re coming up for air they hit you with another killer tune. Yeas later you brag to your friends that you were at that show and about two thousand other people try to claim they were there too but you know the truth- you caught onto them early and were actually at that small club show to see them up close and personal. Even talk to a few of them after the show- they seemed like nice guys. Ha! ,” Wasson concluded.

See The Discarded on March 3rd at The Mansion in Kingston, Ontario with Lowest Of The Low. For more information on the band visit their website.

The Seeker does not accept responsibility for errors, misprints or inaccuracies published within. The opinions and statements of our columnists are not to be presumed as the statements and opinions of The Seeker.

The Seeker Newspaper is located at 327 Second Street E., Cornwall, ON K6H 1Y8
All rights reserved The Seeker does not accept responsibility for errors, misprints or inaccuracies published within. The opinions and statements of our columnists are not to be presumed as the statements and opinions of The Seeker ISSN 2562-1750 (print)  ISSN 2562-1769 (Online)
thank you for visiting Powered by WordPress - Designed by Gabfire Themes