by The Seeker
in Columns
Reading Time: 1 min read
78 6 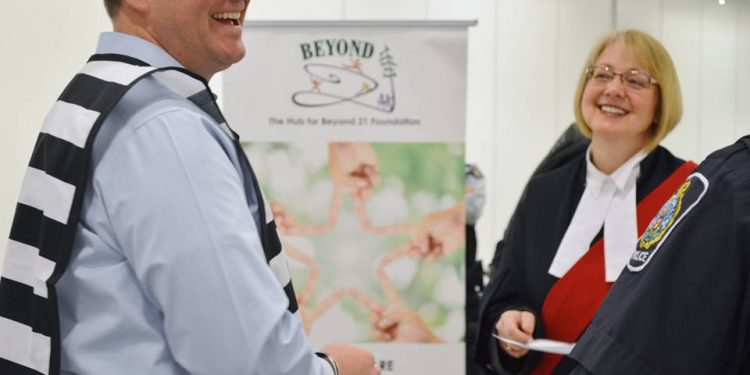 The Second Annual Jail and Bail in support of Beyond 21 was a great success!

Held at Cornwall Square on April 12th people from around the community were able to issue an arrest warrant for friends, family, and colleagues. The day saw many people from around the city brought in for charges such as: ‘streaking on the golf course,’ ‘working too hard,’ and ‘believing John Cena and the Rock are good enough to win an academy award.’ Thanks to the Cornwall Community Police and the RCMP, our jailbirds were picked up, handcuffed, and taken to “Jail” in style! Once at jail they were presented to “Judge Ruth” to learn their sentence and bail was set.

Over the course of the day over $17 000 was raised for Beyond 21 through donations in the form of bail.

A huge thank you goes out to board member Shannon Savard who organized the event, the CCP and RCMP for their support, Cornwall Square for the jail location, the CCVS art club who created the jail, our Judge Ruth Draffin, and the many people throughout the community who participated as jailbirds, volunteered for the day, or who submitted warrants for arrest.

Stay tuned for next year’s event!

Here are a few photos from Beyond 21’s Jail and Bail yesterday. What a fun day! Beyond 21 would like to thank everyone who participated. Remember you can still post bail from their web page or by dropping off donations to Beyond 21! Feel free to tag and share photos of your favourite ‘jailbird!’