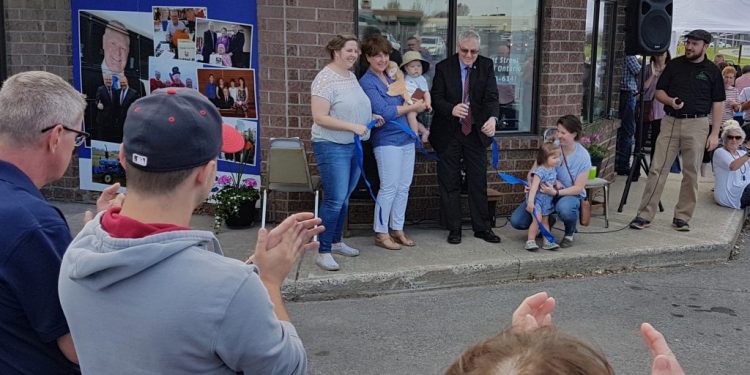 Cornwall, Ontario – Wednesday afternoon, SD&SG M.P.P. Jim Mcdonell officially launched his 2018 election campaign with the grand opening of his campaign headquarters in the former Buns Master Bakery at 900 Pitt Street in Cornwall. Over the course of about 1.5 hours, approximately 100 well-wishers and supporters stopped by the office or parking lot, many staying for a free bbq supper, followed by speeches including one by Mcdonell, and others by a family member, SD&SG M.P. Guy Lauzon and North Dundas Mayor Eric Duncan.

In keeping with tradition, the event included erection of campaign banners on the building and an official ribbon cutting ceremony (photos).

In addressing the performance of the Liberal provincial government, Mcdonell recalled the gas plant scandal and the so-called “fair Hydro plan”. Concerning the economy, Mcdonell remarked: “It’s getting harder and harder for people in this province to get out and make a living.” He spoke of an auto parts company in Mississauga. They obtained a new contract with one of the big three companies and were seeking a permit to expand. After two years of red tape and unable to obtain the expansion permit they relocated to Mexico. A company official recounted how, in Mexico, the president of the country welcomed them. The difference in political cooperation between Mississauga and Mexico was striking. Mcdonell continued: “We’re not talking of a plant with a stack; we’re talking about good paying auto jobs. And they’re just having a hard time here with regulations.” Mcdonell cited an example very close to his own home. His son is an engineer in Vancouver with engineer friends, including one who moved to Calgary in order to work in his field. Some of their civil engineer friends in Toronto are working as wait staff and in other jobs unrelated to their education. Mcdonell looks forward to a return to having Ontarians being able to stay in their home province while obtaining meaningful work under a Conservative government.