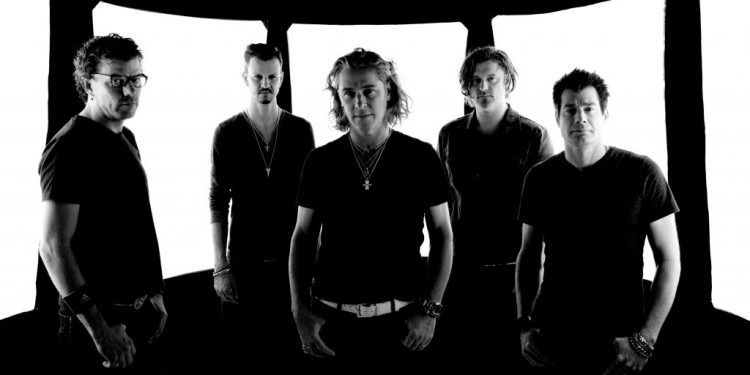 Niagara Falls, New York – Multi-Platinum recording artists Collective Soul, who have sold over 20 million records worldwide, will be playing the Seneca Niagara Hotel & Casino in Niagara Falls, New York on Saturday, August 18th. Collective Soul rose to international fame with the rock anthem song “Shine” in 1993 and have had numerous #1 hits since then.

Bassist Will Turpin plays over 100 concerts a year with Collective Soul, plus he’s a husband and father raising three boys. Despite this busy lifestyle, he still found time to record and produce his debut full-length solo album titled “Serengeti Drivers”.

“There wasn’t a whole lot of time to do that, that’s why it took three years. I had these 11 songs written a few years ago. I recorded when I could. Not much happened in the summer; it gets busy then with touring. I do a lot of this stuff during the downtime, sometimes around Christmas. It’s a give and take, but I’m fortunate enough to play music for a living,” Turpin said.

It was recorded at his father’s studio, Real 2 Reel, the same studio where most of Collective Soul’s Platinum-selling debut album, “Hints, Allegations, and Things Left Unsaid” was recorded.

“I’m still recording there all the time. It’s the home studio, and I’m always really proud to be able to work there. It’s like another day at the office, just trying to get stuff done. I feel lucky to be able to have a studio at my disposal,” Turpin stated.

During the writing and record of these songs, Will Turpin’s wife Donna was diagnosed with breast cancer. This diagnosis impacted him, his family, and the new record.

“The song “All on You,” that’s the second cut on the record, and “betting it all on you” is the hook. That song was taking a positive spin on the situation, betting it all on her that she’d be able to beat it. She beat it, and she’s great right now. Everything is really good on that front,” Turpin disclosed.

Collective Soul had a live album titled “Live” released December 8th, 2017 on Suretone Records. It perfectly captures the energy and feeling of audience participation in the song “Shine.”

The first time that kind of audience participation made an impact on Will Turpin was at Woodstock 94. It was a concert that featured bands like Green Day, Red Hot Chilli Peppers, Bob Dylan, Nine Inch Nails, Metallica, and Aerosmith. The concert, which took place over two-days, drew over half a million people. Collective Soul played the North Stage on August 12th, 1994 along with Sheryl Crow, Violent Femmes, and others.

“Audience participation has been there for a while now. The first time it made a big impact on me where I thought it was something special was at Woodstock 94′. We played on Friday night, and by all accounts, the crowd was loud and almost deafening, when singing the chorus. I don’t think we expect it, but it is a part of our fan experience, we know the crowd is going to sing that chorus,” Turpin reminisced.

The band continues to average over one million Spotify streams per month, and Will Turpin embraces the new technology.

“We’ve seen a complete change in the music industry. In 1994 when we got signed to Atlantic Records, it was still the old way of doing business. They made cassettes of our first three records. We’ve seen things come and go. We’ve seen the whole evolution of music streaming, and Napster court cases and record sales declining. We saw a big evolution. The streams do pay royalties now; I knew that would come around. I didn’t think it was always going to be free; there are royalties involved. As far as new artists go, there are pros and cons to streaming. There are avenues for people to hear your music and make it easier to access. On the other hand, there is so much stuff out there; there is a logjam. It’s not easy for fans to find quality stuff. I still embrace it, all the new technology, it’s a good thing for the record industry,” Turpin reasoned.

This summer music fans will get “All Aboard The Rock & Roll Express” for the tour with Collective Soul, 3 Doors Down, and Soul Asylum.

“We’ve toured with both of those bands before. I think the combination of music between 3 Doors Down, Soul Asylum, and Collective Soul is strong. I am looking forward to the tour. I want to have fun with the crowd, I want our time on stage to be a special as it always has been,” Turpin noted.

“90s music is some of the best, and I hear people say it’s the last good generation of rock and roll. If that’s the case, I feel 90s music gets respect. On the other hand, it’s art, and it’s personal taste. Art is not meant to be ranked, and not meant to be compared; it’s just art. It’s up to each individual,” Turpin explained.

For the upcoming tour Collective Soul are offering VIP packages which include a band meet and greet.

“We try to make it as cool as possible for the fans. There are some cool things like taking a photo with the band. The best ones are when we can take a photo in front of the stage because the fans like that. For us, with the VIP packages, it’s cool to meet fans, but we’re trying to make their memory as good as possible. We’re doing it for them,” Turpin answered.

Will Collective Soul have time to play tourist and check out Niagara Falls?

“There will probably be time to see the Falls, but we’ve seen most of that stuff before. What I enjoy is bringing my bicycle on tour. I like to pedal a lot,” Turpin pointed out.

Next year is the 25th anniversary of Collective Soul. There are plans for a new album in the works, plus a tour to celebrate 25 years.

“There are plans. We have over 20 songs, some of which will make the new record. Probably the most exciting thing we do is create more stuff, and it’s great. We’re still in our prime to create. We’re still getting that satisfaction to create new material. Yes, there will be a big tour to celebrate 25 years,” Turpin replied.

According to Will Turpin, the bond between his bandmates over the past 25 years is a brotherhood.

“I think they might be family, to be honest with you. Dean, Ed, and I have known each other our entire memories. We’re brothers. One of the strongest things about our band is that we know each other, and we love each other,” Turpin concluded.