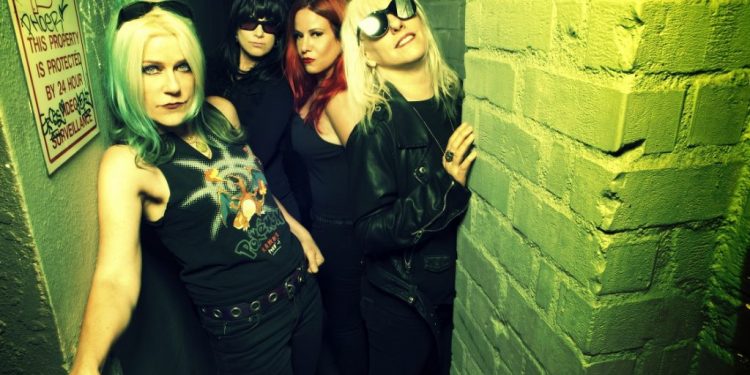 Montreal, Quebec – The second annual ’77 Montreal festival takes place Friday, July 27th, 2018 at Parc Jean-Drapeau and includes a performance by L7. Their heavy sound and eclectic mix of punk, metal, and pop helped usher in the grunge era. Their music also influenced many riot grrrl bands of the 1990s.

L7 played like on televisions shows like Late Night with David Letterman and The Jon Stewart Show. Their music could be heard on various television shows like Beavis and Butt-Head, and on the soundtracks of movies like Natural Born Killers, Point of No Return, and the sequel to Stephen King’s Pet Sematary.

Since 1988 L7 have released six full-length studio albums including Bricks Are Heavy which hit #1 on the Billboard Heatseekers album charts. Some of their most well-known songs include “Pretend We’re Dead,” “Andres,” and “Shove.” Their music has been released on Epitaph, Sub Pop, Slash, and Warner Brothers. Their music can also be heard on video games like Grand Theft Auto: San Andreas and Rock Band 2.

In 2001 the L7 went on hiatus, and they reunited 13 years later in 2014. Now, L7 working on their first new album in 20 years. It has an expected release date of 2019. Donita Sparks explains why they decided to record a new album.

“We want to keep being a band. We’ve done the reunion shows, and we want to continue. I think in order to do that we thought a new album would be a good idea so we’re not just playing old stuff all the time. Also, the success of our two singles that we put out last year has been a good sign. They were really well received by our fans and the press, so we have the confidence to put out a new album,” Sparks stated.

The two singles released are titled “Dispatch From Mar-a-Lago” and “I Came Back to Bitch.” Fans can expect that latter song to be on the new L7 record.

“I think that “I Came Back to Bitch” will be on the new album. The song “Dispatch From Mar-a-Lago” is rather topical, inspired by Trump tweeting, so that probably won’t go on the album. Hopefully, he’ll be impeached by then. We were racing with time to get that single out because we thought he was going to be impeached, and we didn’t want it to be irrelevant when we released it. He’s not impeached yet, so it’s still relevant, but it probably won’t go on the new record,” Sparks responded.

For their new album, L7 are going the crowdfunding route. They have already reached 96% of their goal on the website Pledge Music at the time of publication.

“We didn’t want to wait around for people to decide if they wanted to sign us or not. We know we have fans, we have a very large fan base who want to support us and buy new music from us. That’s our people, and they want to pre-order the album, and that’s what they’re doing,” Sparks replied.

“These days for L7 to get on the radio would be an extreme long shot. These days hopefully you can get on a tv show, soundtrack, or television commercial. Back in the day, those were taboo things, but those are really the only way to make money off a recording these days. Our fans are willing to pre-pay for it, so that’s why we went directly to them,” Sparks added.

L7 were inspired to try crowdfunding after the producers of their documentary titled L7: Pretend We’re Dead had a very successful Kickstarter campaign.

“We have a documentary out, and the producers of that documentary had gone the Kickstarter route to fund that, and it was very successful, so that’s what we decided to do,” Sparks noted.

In the documentary, Donita Sparks credits L7’s fanbase for keeping the band alive during their 13-year absence.

“(Our fans) They are coming through for us as they always have. Even in the documentary, I say the fans kept us alive in our absence by posting things on Youtube, creating fan sites, and Myspace pages when the band didn’t even exist. I think they missed us a lot and are glad to see us back. We appreciate that. We also have new fans who never saw us back in the day, and they are super stoked,” Sparks said.

The documentary L7: Pretend We’re Dead is a dynamic combination of never-before-seen home video that helps to tell the story of the band. Fans are given a backstage pass to witness the rise, fall, and ultimate redemption of these fierce feminist pioneers of Rock and Roll. The documentary can be streamed on Hulu and Amazon Prime in the United States, and it’s available to Canadians to rent or purchase on Youtube Movies.

“The documentary came about because the band had been filming ourselves since the late 80s with a video camera. Some of the early tapes were lost when our camera was stolen. Our footage picks up when we were recording our break out album Bricks Are Heavy in 1991. We had all this footage, and it was a time capsule of the era, and it was a time capsule of grunge. It was certainly very intimate footage of ourselves that shows our rise, plateau, and fall of our career. It was all captured on video by us. I knew we had something cool, something unique. I showed it to a director, and she thought there was a film there. That’s how it got going,” Sparks recalled.

The late 1980’s and 1990’s were a fun time in Donita Sparks life. It was also a very different era because people were not constantly connected to technology like they are today with their smartphones.

“There are a lot of favorite memories; it was a fun time. Now when we’re on tour, everyone is on their phones, everyone is on their computers. We goof around a bit, but it’s not like back in the day in a van, forced to interact, even if you were mad at each other. Those days are over. You can completely detach if you want to these days. That’s an era not coming back, so I’m glad we go to live through that,” Sparks reminisced.

The ’77 Montreal festival will be L7’s first concert there in about 20 years. They are looking forward to the festival, and to the local cuisine of la belle province.

“We’re really looking forward to it. Our tour manager said the people running it are old school punk rockers, and I hear it’s a really cool festival. We’re thrilled, and we haven’t played Montreal in twenty years. I’m hoping they have poutine on the grounds because that is a big hit with L7.

L7 are also looking forward to seeing Suicidal Tendencies whom they recently played Vegas with.

“We like Suicidal Tendencies. In fact, we played with them in Vegas recently, and Suzi and I were remembering that they were an influence on us. We like Suicidal (Tendencies), and we got caught up in a riot at one of their shows. There are elements of Suicidal (Tendencies) when they play slow that sound a lot like L7. We made that connection in Vegas, right, that’s where we got that kind of playing at times. Yeah, we like that band,” Sparks disclosed.

Donita Sparks is asking L7 fans to bring their middle finger and a smile to ’77 Montreal.

“Thanks for coming to see us and be prepared to have a great time. We want to see some middle fingers in the air, with some big smiles on your faces – especially when we play “I Came Back to Bitch.” There is a lot to bitch about, and whether you’re male or female, everyone should be bitching loudly right now. Come bitch with us with smiles on your faces,” Sparks concluded.

Also playing ’77 Montreal on Friday, July 27th at Parc Jean-Drapeau is Rise Against, AFI, Me First and the Gimme Gimmes, Anti-Flag, The Interrupters, Sick Of It All, Steve Ignorant (of Crass), D.O.A., The Rezillos, Planet Smashers, Jeff Rosenstock, No Policy, Iron Chic, and more. Tickets for the festival are $70.

Compassion in the midst of tragedy