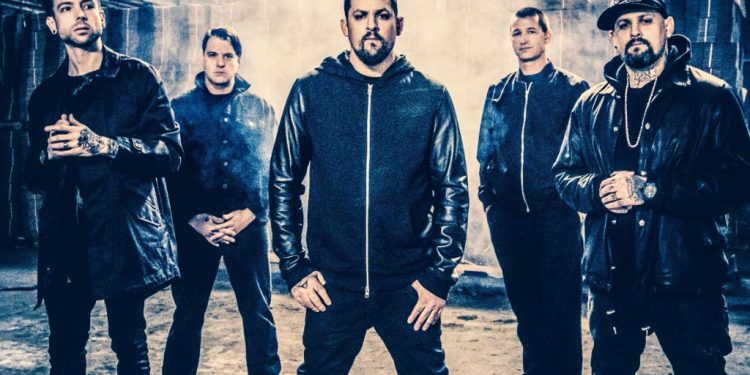 On this tour, Good Charlotte will be promoting their seventh studio album titled “Generation Rx” released on MDDN / BMG.

“Generation Rx” charted at number 164 on the Billboard 200. The name of the album is inspired by the opioid epidemic happening in the United States.

“I definitely think the opioid epidemic is getting worse. I think the music industry is a big part of that in both a positive way and in a negative way. A lot of music out there makes drug culture seem like a positive thing, makes it sound fun, and makes it enticing. I also think a lot of musicians and artists try to paint a real picture of how drug use can also have a negative effect and even ruin lives. I think it’s an open conversation and a lot more people are talking about it openly and freely which is a good thing. The youth want to know what it’s all about. I think our jobs as musicians, especially as Good Charlotte, is to have a message of hope by talking about the dark moments of life. It’s a big part of Good Charlotte’s lyrics. Finding those places in life that it’s hard to get through and finding some ray of hope and finding a way to get through to the other side,” Good Charlotte guitarist Billy Martin explained.

In addition to the opioid crisis, the album also addresses mental illness. For example, the second Good Charlotte song on “Generation Rx” is called “Self Help”.

“The second track on the new record is called “Self Help”. That song addresses the topic of mental illness. I think as artists and musicians everybody struggles with this to some extent, and some more so than others. I know our fans have voiced their opinions to us about this. A lot of this record, the context came from the meet and greets and meeting fans at shows and stuff. There are a lot of heavy stories that come from fans that you may not anticipate when they walk in with a big smile on their face and they are happy to meet their favorite band. Suddenly, they are sharing something personal. People carry heavy stories and carry weight on the shoulders about the things they go through in life. I think Good Charlotte has always had a relationship with those people who enjoy our music and relate to it. I think music can help a lot of people, and it’s helped us during difficult times in our lives,” Billy disclosed.

A few weeks ago, Good Charlotte was on The Late Late Show with James Corden on CBS and they were joined by Dr. Phil for a skit. Dr. Phil is an advocate of mental health.

“Unfortunately, when you do these shows, you’re only there for a couple of hours at the most. Dr. Phil hadn’t arrived yet, and we were on stage sitting on the couch for that scene. When he arrived, he walked right in to do the scene. I know Dr. Phil is passionate about that subject and I know he would have loved to sit with us and rap about it, but it didn’t get to happen,” Billy replied.

Good Charlotte went on the show to promote their new single “Prayers”, but it’s their skit with Dr. Phil collaborating on their smash hit song “Lifestyles of the Rich & Famous” that went viral on social media.

“It was funny. James Corden is a funny guy. He approached us the day before and said he had some ideas for a skit. We thought it sounded funny. Whenever we do those types of shows, we always hope we’ll get to do a skit. It’s fun for the band, and something a little different. It was good, it came out funny. We were there to debut our new single (“Prayers”), but I think the skit with Dr. Phil reached further, but that’s okay, that’s how the internet works these days,” Billy pointed out.

The Good Charlotte song “Prayers” is a social commentary on the empty phrase and sentiment “thoughts and prayers” which is often said after a tragedy like a shooting or an overdose.

“You hit the nail on the head with what it’s about. I’m not a religious person. I didn’t grow up in a very religious background. It’s not something that’s a big part of me. I think it’s easy for people to throw those words around like a safety blanket. It’s like the statement thoughts and prayers is saying something nice to somebody and somehow it’s doing your part. That’s okay if that makes you feel better and helps clear your conscience, but there is more to do to help people. I hope this song can help get people to talk and have an open conversation about what they can do to help others besides saying empty words. It’s a reaction to the commentary we’re hearing after the shootings, and with the drug overdoses, we’ve been seeing. Clearly, there are a lot of people out there who need help. It’s a hard subject for some people. I like to be grounded a little more in reality. There are ways we can work together to make a difference. Just having a through and or prayer about someone is only going to go so far,” Billy remarked.

Another single off the new album is called “Shadowboxer”. A music video for it was released this summer. In the video, Good Charlotte is performing in an abandoned mansion.

“This Good Charlotte record has more emotional context than some of the previous records. When it came down to this record it was about making a darker record, a sad record,  a heavier record, and a more emotional record. Lyrically, I think, the twins really wanted to dig down and address some subjects they were passionate about and wanted to talk about. Just because life is good, and you’re successful at what you do, doesn’t mean you’re not a real person, and doesn’t mean you don’t have doubts about yourself and struggles. It’s hard to talk about that stuff, but we’re choosing to come out and talk about some of that stuff,” Billy elaborated.

The final track of the album is titled “California”. The song offers a hopeful ending for the audience.

“Hope is what describes this record. There is a lot of doom and gloom with a little bit of hope. It’s always been our thing. In the past we’ve had our happy upbeat songs too, and this record kind of needed one. There were a few other songs written for this record that didn’t make it because they didn’t have the right vibe, and “California” was the perfect in between, and just upbeat enough to give the album a happy ending. It felt like the last song too, leaving things on a positive note,” Billy explained.

Over the past two decades the members of Good Charlotte have grown from young men to dads, and with fatherhood comes a new perspective on how they see the world.

“Being dads changes everything. You think about how your career is going to go and the decisions you make. I think a lot of the pain and anger in the lyrics. People ask what is Good Charlotte so angry about? They are all married, have children, have a successful career. Life should be good, but you look at the world we live in, and our kids are going to grow up in this world and go through the same pain other kids go through in a world that is constantly changing. The pain from the lyrics comes from the standpoint of a dad looking out for his children and how they are going to grow up,” Billy stated.

The music of Good Charlotte enhances what is being said in their lyrics. According to Billy Martin, his guitar work helps to paint a more vivid picture for the fans.

“Benji and Joel are very gifted songwriters. They’re twins and have a connection with each other. They know what the other is thinking, and to be able to write songs like that is special. I needed to figure out what I can bring to a song. I learned a long time ago, that I can take the concept of a song and paint a picture more vividly with my guitar work. This record has a lot more of our personal influences that we bring,” Billy said.

“Good Charlotte has always had a very special relationship when it comes to Canada. It’s always been some of the best shows. We liked being on Much Music back in the day. We are thankful to Canada for all those awesome shows. Thank you to the fans who have seen us a bunch of times before and keep coming back out. Also, thank you to the new fans who are coming out to their first show and seeing us live. We bring a lot of energy! See you there,” Billy concluded.

See Good Charlotte with Sleeping With Sirens, Knuckle Puck, and The Dose at MTelus on Friday, October 26th, 2018. Doors are at 5:30 pm and the show starts at 7:00 pm. Buy tickets online.