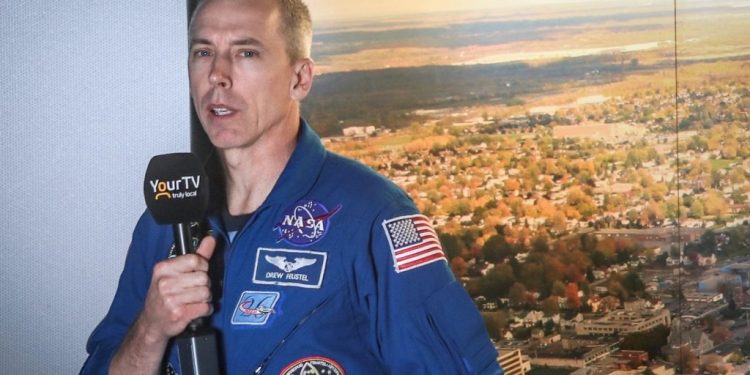 Cornwall, Ontario – The keynote guest speaker at the Team Cornwall Year in Review was none other than NASA astronaut Dr. Andrew Feustel (nicknamed Drew). This was Drew’s first speaking engagement since returning to the Earth on October 4th, 2018. Drew is very familiar with Cornwall because his wife Indira is a Cornwall native.

The over 300 people in attendance at Galaxy Cinemas (no pun intended) were delighted to hear Drew’s experiences as a NASA astronaut. Drew also shared pictures of his work in space on the silver screen including an aerial photograph he took of Cornwall on the International Space Station taken 400 kilometers above the Earth’s surface.

Becoming an astronaut was a dream come true for Drew.

“I was interested in being a part of the space program since I was a kid. I’m exploring my dreams. I’ve had some great opportunities and avenues to do that and great support from my family and friends. I was lucky to be in the right place at the right time with the right competition to get me to where I am today,” Dr. Andrew Feustel stated.

Drew has a Ph.D. in Geological Sciences from Queen’s University in Kingston, Ontario. However, in some ways, it was his work as an auto mechanic restoring classic cars while attending community college in the United States that helped prepare him for his first space mission – removing a bolt from a piece of expensive equipment inside the Hubble Space Telescope.

“It happened at the Hubble Space Telescope during my first space flight and my first spacewalk. My first task was to remove a bolt in a 132-million-dollar piece of equipment that was in the telescope. It was the number one priority for the mission. I had no idea why they choose me to do that, I’d never done this before. With a wrench in my hand in space, I had to get this bolt out that was stuck. A few weeks ago, it was the Hubble anniversary and we were discussing why the bolt was stuck in the first place. After a couple of tries, we realized it was over tightened. What the engineer’s thought was going to be the release torque, I far exceeded that with the wrench. We got to a point where I thought we were going to break the bolt off and ruin the mission. Fortunately, that didn’t happen, and I’m now talking about my third space flight. It could have easily been my one and only,” Dr. Andrew Feustel said.

Now Drew is a veteran astronaut – only two other human beings have spent more time walking in space than him. During his last mission which commenced in March 2018, Drew became Commander of the International Space Station.

“Being Commander of the International Space Station means a lot of responsibility. It means I’m in charge of the entire crew, the safety of the crew, the safety of the spacecraft, and the success of the mission. It’s not a job I took lightly. It was a real pleasure and honour to lead the team that I did in space at the station,” Dr. Andrew Feustel reflected.

Drew is a dual citizen of Canada and the United States, and he works for the American space agency NASA. On his last mission in March 2018, he was launched to outer space on a Russian Baikonur Cosmodrome located in Kazakhstan. The trip to outer space is less than 10 minutes by that vehicle, and once in orbit above the Earth perspectives quickly change.

“We don’t see borders from space. The political challenges that we recognize from Earth while we’re here are very different from the challenges we experience in space – in that we don’t experience political conflicts in space. It would be nice if more humans had the opportunity to see Earth from space,” Dr. Andrew Feustel noted.

Traditionally space exploration has been publicly funded, but the private sector is going to have an important role in the future if more humans are going to be living and working in space.

“I think the private sector is going to be important for us. We rely on them to push the envelope and create new opportunities for us in space. I think it’s going to have a critical role in having human beings living and working in space long term,” Dr. Andrew Feustel added.

During his last mission, Drew did important scientific research. However, it was not all work for Drew. He had the opportunity to create a music video from space written and composed by his friend Gord Sinclair of The Tragically Hip.

“There were two videos that we participated in from space. One was a video for Queens University, and the other was with Gord Sinclair who is a friend of ours. He composed and wrote a song for me to perform in space. It’s something Indira and Gord thought of ahead of time. We took the opportunity to perform that, but I hope I never have to perform that song in public, but it was a lot of fun to do and I enjoyed it,” Dr. Andrew Feustel concluded.