by Mai-Liis Renaud
in News and Announcements, Sports
3 min read
3 1
0 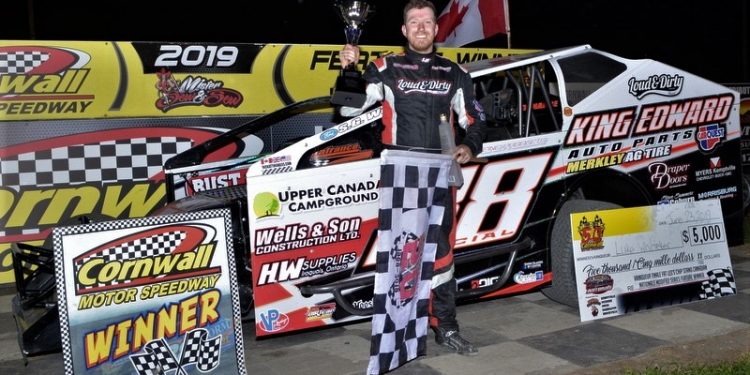 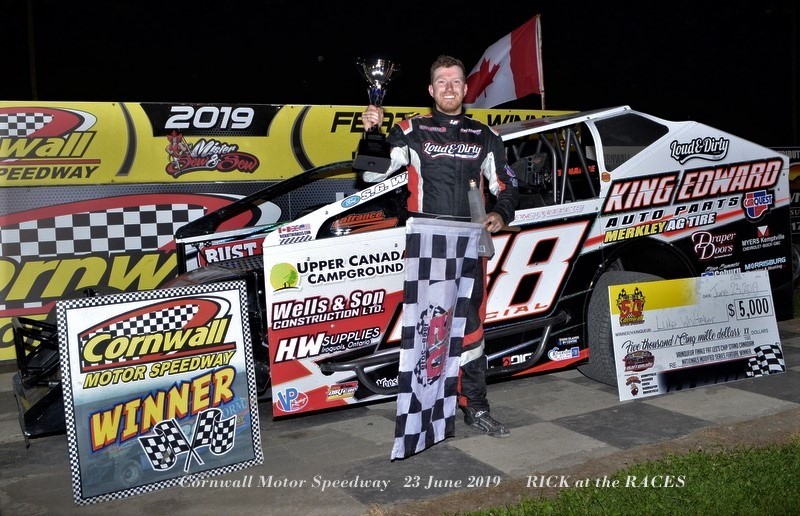 Cornwall, Ont – Sunday, June 23, 2019 –It was one of our biggest shows of the year – part of our 50th anniversary celebrations with a 50-lap Modified feature counting for the Fat Les Chip Stand Canadian Nationals, the Sportsman ran a 50-lap feature paying the Farnham Ale Lager Pro-Stock Series was in town for 50 laps and the Dany Lefebvre Memorial for Mini-Stock with a 25-lap on Rutter Elevators Night.

In the 50-lap Canadian Nationals Series, Jordan McCreadie quickly moved to the lead with Michael Maresca and Steve Bernard. McCreadie had company in Luke Whitteker by lap 5 as he moved to second. McCreadie led the field as the feature picked up some momentum with Bernard still strong in third. At the halfway point, McCreadie led the way with Whitteker on his back bumper and Bernard in their tracks as well. Whitteker found something on the outside and took the lead on lap 27. A lap 38 caution brought the field together, McCreadie had issues with his car and lost his second spot. Whitteker to the lead with Bernard and Tim Fuller running in third. An exciting finish as Bernard made several attempts but Whitteker never looked back and got the win over Bernard and Fuller.

In the Next Level Home Improvement Sportsman feature, Brianna Ladouceur moved up to the lead over Jason Shipclark and Devin Willis. Ladouceur led the way as Shane Pecore started to make some moves and took second by lap 12. Pecore set sights on Ladouceur as Pecore took the lead between lapped cars on lap 23 and pulled away from the lead as Ricky Thomson having a strong run in third. Pecore building a good lead as Adam Rozon passed Thomson for third. Pecore led the final laps to win his fifth feature in a row over Ladouceur and Rozon.

After a few false starts, Yves Hamel took the lead in the 50-lap Farnham Ale and Lager Pro-Stock Series. Hamel had Bruno Cyr as dancing partner as both drivers ran side by side for several laps. Hamel remained in first as Bruno Cyr found something on the top side by lap 20 and both drivers ran side by side for the lead as CD Beauchamp made some strides and moved to third by halfway point. Beauchamp had a strong ride and took the lead over Hamel and pulled away from the field as Marc Lalonde moved to third with 15 laps to go. Lalonde used the outside lane to pass Hamel for second. CD Beauchamp led the final laps to get his first win of the season at Cornwall over Lalonde and Hamel.

The big blocks are in town next week! The Super DIRTcar Series will make his annual stop with a 100-lap event with the winner getting $7,500! Come and see the biggest stars from the series compete against our local talent. 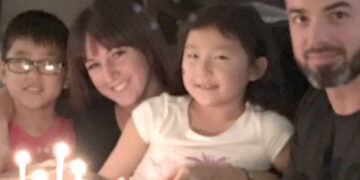 Locals in the Loupe: Josh Casselman owner of Kings and Little Ones – Celebrating 5 years in Business! 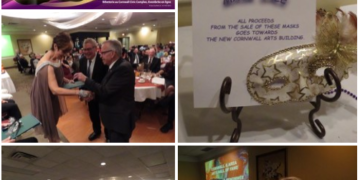 How to Take Cycling to the Next Level