by Editorial Board
in News and Announcements, Sports
Reading Time: 20 mins read
24 1 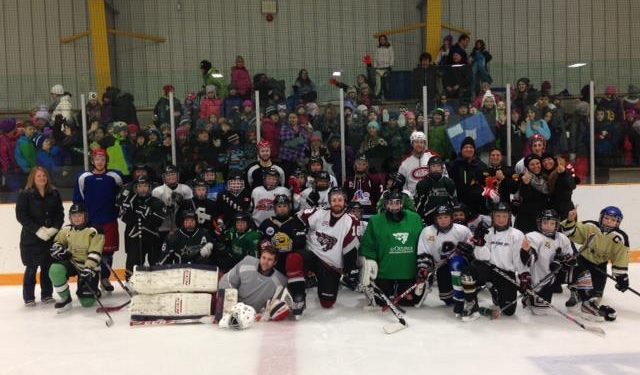 Long Sault Ontario – Students at Longue Sault Public School opened their hearts to the less fortunate recently, raising $1,300 for the Champions for Kids Foundation through a charity hockey game and silent auction.

The fundraising effort included the hockey game Thursday at the South Stormont Recreation Centre involving Longue Sault students and staff, and players from the Cornwall Colts Junior A hockey club, as well as a silent auction featuring collaborative, one-of-a-kind artwork created by classes at the school.

The project is part of a school initiative designed to instill a sense of character and global awareness in students as well as to encourage them to take ownership of efforts to help others, said Ryne Gove, a teacher who organized the campaign.

“We also want to teach them about the value of being grateful for what they have and to look at the world through a different focus.

“The really cool part about this campaign was there was no prize for the top fundraiser or a pizza party for the top class. The kids did it simply because they wanted to make a difference for people in their community.”

The campaign accomplished this by featuring student-created artwork for the silent auction, which ran from last Thursday until yesterday. Each class was given a large canvas on which they could create whatever artwork students wished to, and every student was encouraged to add their own touch to their class creation. The art was displayed at the arena during Thursday’s game, and was featured on Facebook as part of the silent auction.

The school asked for a $2 monetary donation as an admission fee for the hockey game, which was refereed by former NHL player Chad Kilger, and split players into a black and a white team, with the white squad winning 8-6.

The Champions for Kids Foundation is the charitable arm of the Upper Canada District School Board and raises funds so children can play sports, and enjoy the arts, and to help their families defer costs associated with their medical care, such as fees for parking at hospitals and fuel costs for out-of-town care. Last year, the school’s charity focus was on the We’re NUT Given’ Up campaign, with students raising $8,000 to help a family affected by cancer.