by The Seeker
in Leisure & Lifestyle
Reading Time: 5 mins read 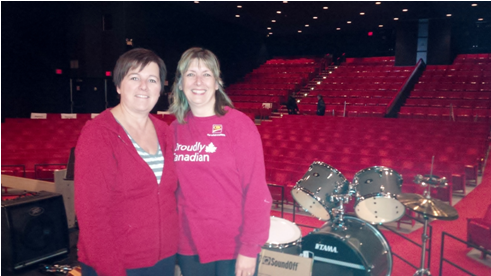 Seaway Valley Theatre Company can boast a record attendance with their recent production of Les Misérables.   In fact two of their shows were sell outs at 656 seats, and rumour has it this year there were ticket scalpers working the venue.  “Not bad”, says Lise Richer, co-producer and SVTC’s President, “considering the cold temperatures and a brutal snow storm, our patron couldn’t keep away.”  Both, Christiane Taylor, co-producer, and SVTC’s Marketing Directory, and Lise Richer agree that after eight years of hard work by countless volunteers, the SVTC has finally gained the momentum needed to make them comfortable with these major undertakings, and they were quick to point out this year’s venue actually covered their costs!

It’s no secret that a production at this level operates with a typical budget of more than $30,000.00 which does cause a few concerns and many sleepless nights if the box office doesn’t perform well.   Both our producers have been around the SVTC for a number of years and are quite involved with the day to day business of the show.  At tear down Sunday morning, after the final show, I certainly sensed the euphoria from the two of them.  They are extremely grateful for the participation of the community which include those who dared to audition, the numerous support staff, the sponsors and the paying audience who continue to support top notch theatre in our community.

You may ask if Cornwall is becoming known as a theatre town!  Perhaps we are, as it appears travel agencies have picked up on this troupe and busses arrived from Greenfield Park, Huntington, Ottawa, & Maxville to name but a few.  It seems some strategic marketing along the 401 to Morrisburg, Prescott and Alexandria in Glengarry generated strong interest too.  Expanding beyond Cornwall’s borders seems to be a key to filling the seats; especially after a sixth show was added this year.  Also contributing to the surge of attendance was the new feature of on-line ticket purchase through their website.

SVTC is not the only theatre group operating in our city, as we also have Vagabond Theatre, and the newly formed Théâtre de L’Amalgame.  However, SVTC is our largest theatre group, with enough of a talented pool of volunteers to supply a production’s needs, where the cast, crew, and orchestra, can exceed a hundred persons strong!

Joining a production can require up to five months of commitment with minimum of three evenings per week for rehearsals.  Then expect the final two weeks to be infused with at least two rehearsals and six finalized shows – wow, now that’s an incredible amount of devoted time!

Overall, being part of it is quite a puzzle. Rehearsals are not on location, but practiced at various high schools around town with the help of the Upper Canada School Board. The Board provides valuable space and time at no charge, while still ensuring that all is scheduled around school activities.  To make matters worse, the music is only released to the show three months prior due to royalties, which shortens the practice time for both the musicians and the singers.  Quite often musicians are forced to practice alone in their homes, which offer less opportunity to create a cohesive “band” sound.

Aultsville Theatre facility rental is a major cost to the production, so, when the show date nears, there is only one week budgeted to design and build the set, plan the lighting, install the sound, and allow the orchestra to finally practice in the hall.  As this was a major complicated musical production, the workload was further challenged by the use of twenty five microphone headsets and a multitude of stage microphones and the coordination of an orphan choir hidden in the wings.  The objectivity, precision and care to put all this together in such a short time was colossal!

Like most sensible Cornwallites I decided to purchase a ticket and avoid the last minute lineup fuss and enjoy the show as a patron…whew!  I must say, I was not disappointed, and thoroughly enjoyed this local amateur production of Les Misérables.  Bravo!  Bravo to all those who performed and stretched their individual comfort zones.  The buzz around town all week was that Les Misérables was a “must see”!  And those who saw it were very proud of the talent of the performers and the team that supported the show.  Clearly the lead role Jean Valjean, played by Jim Malyon, anchored the show, with the rest of the cast in brilliant support.  The producers also added some special mentions reflecting on the success of a couple of first timers, so shy at first, who slowly edged out of their shell and performed superbly.  This is what community theatre is all about – it gives everyone a chance!  My personal favourites, that I get a kick out of seeing, are my old neighbour Bob Firth and the guy from Winners (Paul Aubin) who are always involved in doing great theatre.  Who did you see that you recognized?

When I first came to Cornwall in the mid-eighties, I had heard of a special music teacher who everyone adored. That talented legend lives on once again – Brian McCartney, the Musical Director, with his team of eleven musicians played an incredible three hour marathon for us!  Cathy, a former high school music student, whom I met on a recent excursion, had seen the show too.  She reflected on how dedicated Brian is within our musical community and that she was part of the school band at CCVS, where Brian always got them involved in many musical outings which are now her very precious memories.  She had admiration for the musicians in the pit and explained how important it was for the orchestra to adjust to the singers.  There was an obvious concentric commitment to this musical.

As I visited the crew during the Sunday morning tear down, everyone was working feverishly, scrambling to get everything dismantled and into waiting trailers and trucks to return borrowed props, TV’s etc. back to their rightful owners.  I was surprised to learn how much our community supports this show with their needs – a big thanks go out to CCVS, Cogeco, Leons, Upper Canada Village, and Holy Trinity to name but a few from whom so many things were borrowed.

Everyone these days has a bucket list, including SVTC.  “We need a home” says Christiane and Lise.  Their other smaller productions are held at Dream Builders Studio.  Ideally a permanent facility with seating for about a hundred and fifty would meet current needs.  This way all the infrastructure and rehearsing would be at one location and would allow performances to be consistently at professional grade and allow greater opportunity for talented performers to excel in our community.

After every final show, it’s been customary for the cast and crew to meet down at the Knights of Columbus for a well-deserved post production party and a bit of a post-mortem. This year was no different.  Other than the applause they hear, there is no paycheque for these volunteers, but that’s okay because what drives this theatre company is the feeling of family.   Over the five months they work hard together, relationships are cemented and there is no greater reward than these new found comrades at arms.  It’s no secret that the fellowship nurtured here builds a better community. They leave behind a wonderful experience of being part of something to be remembered for years to come.

The next production will not be decided until April. They are forced to wait and see what musical rights will be released.   Lise and Christiane’s ultimate hope would be to do Mama Mia, or even Jersey Boys.  Right now, all they can do is keep their fingers crossed and hope for the best.

How about you?  Does theatre interest you?  SVTC is always looking for people to audition, and they also have a greater need on the technical people, sound engineering, set design, costume design, etc.  Do you have a talent that you could share?  Don’t be shy, visit their website and let them know you are interested. www.svtc.ca

It is another standing ovation! Congratulations to Seaway Valley Theatre Company for another successful production!