by SeekersAdmin
in Arts and Culture
Reading Time: 2 mins read
24 1 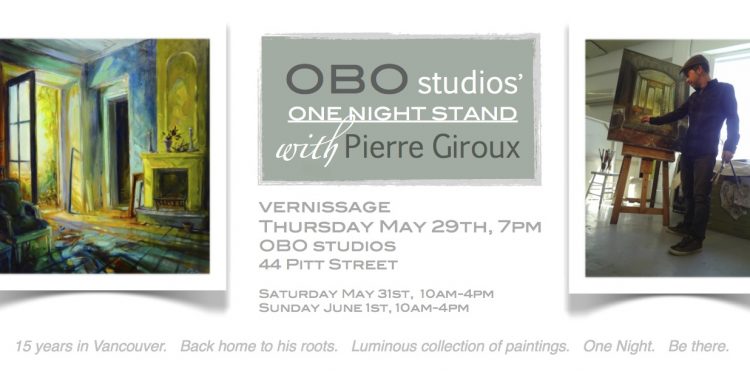 OBO studios will be hosting an exhibition of more than 20 large scale oil paintings by local artist Pierre Giroux who has been living and working on his oeuvre in Vancouver for the past 15 years. The exhibit features many of the artist’s signature dramatically lit, timeless interior spaces, most of which have never been displayed to the public. The opening reception will be held on Thursday May 29, 2014 at 7pm, the exhibit will continue Saturday May 31 and Sunday June 1 from 10am-4pm at OBO studios, 44 Pitt St.

Giroux’s paintings have been widely collected by many Cornwall residents and this will be the first opportunity to view his collection since his return. He is currently represented by West End Gallery in Edmonton and Vancouver and has been exhibited across Canada.

I’ve always had a great interest in the rooms of times past and their associations with the people they’ve touched and surrounding environments they’ve shaped. From a staircase discovered in an abandoned farmhouse in southern Ontario to a window inspired by an Italian villa in Tuscany, this is what moves me to paint. I’m drawn to spaces – the way light plays within them, shapes casting shadows across a wall and floor and the influences incurred by the passing of time. I hope to invoke a sense of timelessness for the viewer with this body of works.

Pierre has studied in the Florence Program in Italy, as well as at the Ontario College of Art & Design in Toronto, Ontario.