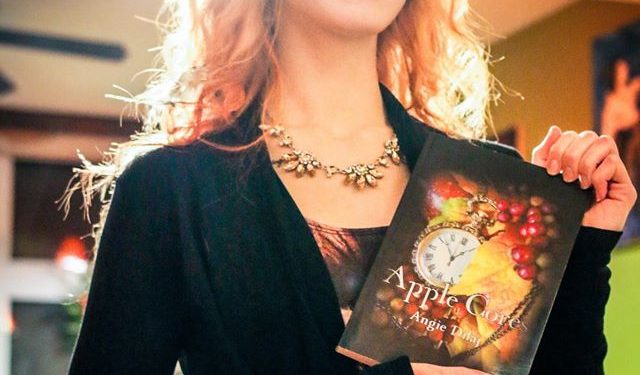 Cornwall Ontario — She sat in the brown chair at the artsy cafe where the lime walls are adorned with splashes of colourful and vibrant paintings. The yellow light illuminated through her golden ginger hair, as she quietly sipped on a steaming mug of green tea. On the table there was a book. Her book.

I interviewed author Angie Dilaj at the Grind in Cornwall to discuss her first ever published novel entitled Apple Cores.

Who is Angie Dilaj? She was born in Montreal Quebec, and was raised with two creative sisters – Loni and Teri Dilaj. She was encouraged at a young age to pursue her artistic abilities in drawing, painting, music, writing, and, more recently, doing contortions. Currently she is a certified yoga instructor working in Cornwall.

Although Apple Cores is her first published book, it is not the first time her writing has been in print. She has two poems, “Send Out the Pawns” and “With Light to Lead Them On”, that were both published before finishing high school at Rothwell Osnabruck in 2009.

“English was one of my favourite subjects in school. I took Writers Craft because I loved it so much,” recalled Dilaj.

Her inspirations for writing include Wilde, Tennyson, and Poe.

“Oscar Wilde’s The Picture of Dorian Gray inspired me to write. He uses nature and the elements to express his ideas. Lord Alfred Tennyson’s In Memoriam is also inspirational, and Edgar Allan Poe’s stuff is awesome,” raved Dilaj.

Like Wilde, Angie’s writing reflects her fascination with the natural world, of darker elements and the beauty within the balance of life and death.

“My love for nature inspires me to write. What I write has a natural element to it”, divulged Dilaj.

Her interest in nature, and themes like life and death are clearly evident in her debut book.

The setting of Apple Cores takes place in eighteenth-century Lunarbre, an isolated Louisiana island, where residents are blessed with the gift of resurrection by the spirit Lorelei. The story follows four main characters, a doctor, a militia captain and his wife, and a prostitute. When residence of the island start dying permanently, it is up to these characters to discover what happened to the spirit Lorelie before death embraces them all.

I asked Angie about her writing process.

“I write on a laptop, I’m not as creative when I write by hand. My emotions don’t play a role in my writing. I listen to music to keep my thoughts flowing”, Dilaj disclosed.

I also asked Angie, can you judge a book by its cover, and more specifically, can we judge your book by it’s cover?

“My book has quite a bit to do with the cover. The island is protected by a spirit, and time stands still for them. It is set in the fall. A nice bright cover will grab a readers attention,” concluded Dilaj.

If you would like to purchase a copy of Apple Cores by Angie Dilaj online, the books is on sale now at Amazon.ca: