Here comes Santa Claus with a bag of gifts to win! 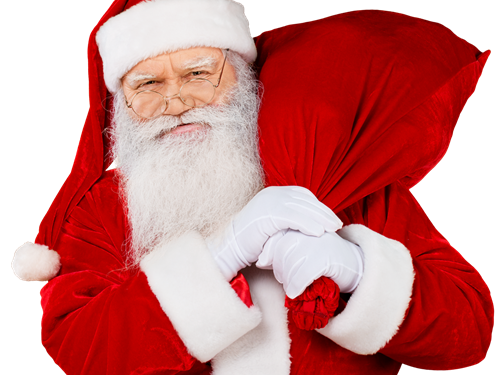 Cornwall Ontario — On Parade day, this coming Saturday November 15th, 2014, the DBIA and Santa Claus Parade Committee invite you to join them downtown during the day for the 2nd Annual 3 on 3 Street Hockey Tournament for Girls and Boys age 7-14.

While downtown, be sure to stop by Drake International at 226 Pitt Street between noon and 4pm to pick up your ballot for a chance to win prizes from Alpine Interiors, Bicycle World, Caveman Strong, Drake International, Fantasy Realm, Footmed, Jasmar, Pommier Jewellers, Spinners, Studio 101, Schnitzels and more.

Each of the participating businesses will have a sign posted during Parade Day with their Station number. Correctly match 5 businesses and their station number to qualify for the draw. Ballot sheets must be handed in to the Drake International office located at 226 Pitt Street by 5pm. A random draw will take place shortly thereafter from the qualifying ballots. The winning ballot will be called in directly to Santa himself and the winner’s name will be posted on Santa’s

Float for all to see…The winner will be encouraged to meet with Santa at the end of the parade for a photo opportunity and to receive the contents of Santa’s Bag.

The 2014 Santa Claus Parade will be held on Saturday November 15th, 2014. The parade will begin at St Lawrence Secondary School on Second Street and continued down Second Street to the Royal Canadian Legion Branch 297 where awards will be given out to the judges’ top picks.