Michael Stacey returns to the River Kings lineup on Saturday 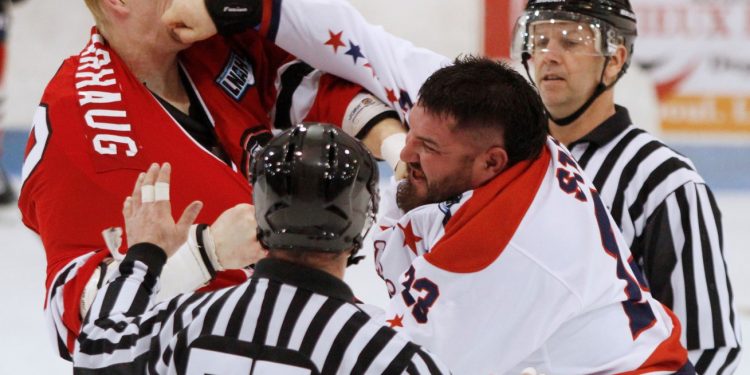 PHOTO by ALLISON PAPINEAU: River Kings enforcer Michael Stacey lands a punch on Mike Varhaug of the Braves in LNAH action on Friday night in Laval.

Cornwall River Kings – The River Kings will have some big help in the lineup on Saturday night.

Fan-favourite Michael Stacey of Kahnawake will make his 2014-15 debut at the Civic Complex. Last season, in five games with Cornwall, Stacey picked up 26 minutes in penalties.

Cornwall, which is 2-0-1 in its last three home contests, welcomes Riviere-du-Loup on Saturday night. The puck drops at 7:30 p.m.

André Sandrzyk and Philippe Pépin, who were acquired early in the week from Thetford-Mines, are also expected to make their River Kings debut this weekend.