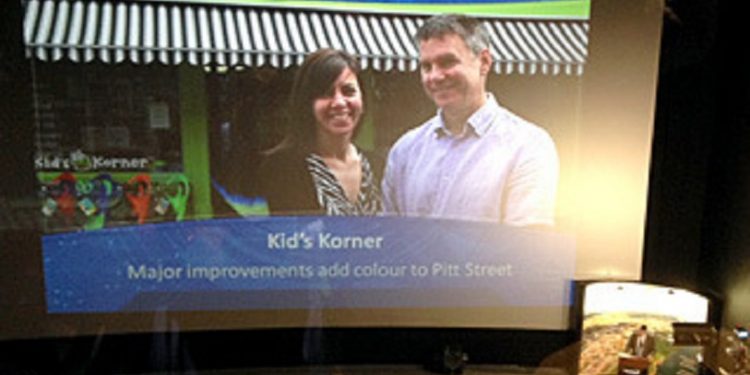 Cornwall Ontario (ChooseCorwnall.ca) – In what has become a popular December tradition, the year’s top business stories were celebrated at the Team Cornwall Year in Review meeting.

Over 300 community and business leaders were on hand for Cornwall Economic Development’s presentation which chronicled investments made by well over 150 businesses.

“2014 was another positive year of growth for Cornwall, with significant development occurring across all sectors,” said Mark Boileau, Manager of Cornwall Economic Development.

One of the key measures of economic development activity is building permit activity, and while the final numbers are not quite tallied, the value of building permits issued in 2014 are expected to top $55million.

“The value of building permits issued in 2014 represents an increase of 80% over 2013,” noted Mr. Boileau. “Our Building Permit department has processed 715 permits this year, which is the highest total since 1989.”

Some of the larger development projects occurred in the Cornwall Business Park with many industries and distribution centres reporting growth. The Business Park also welcomed Evotech, a new coatings manufacturer, as well as Source Wood.

Cornwall’s commercial sector saw record levels of growth with Boston Pizza and Future Shop opening in 2014. A new commercial plaza by Smart Centres is also set to open in early 2015.

Downtown Cornwall remains a vibrant and popular destination with residents and visitors alike, with new restaurants, new shops and the re-opening of Ontario’s oldest inn.

Residential development activity was also high this year with 128 family units being constructed, almost triple the amount in 2013. In addition to subdivision development, major projects such as Knox City Centre and the Cotton Mill Lofts are helping to attract new residents to Cornwall.

“Most of the development in the institutional sector will not appear in our building permit totals, but it creates significant economic spin-off,” says Mr. Boileau.

The meeting was kicked off with greetings by Mayor Leslie O’Shaugnessy, who introduced the new City Council.

Team Cornwall Chair Peter Gault also presented highlights from activities by the local ambassadorial group over the past year.

“Cornwall once again is leading the way when it comes to attracting new investment and new residents,” said Mr. Gault. “It starts with the people in the room this morning, but extends to all our ambassadors, young and old.”

Mr. Brassard, who lives nearby in Valleyfield, noted the similarities between Team Canada and Team Cornwall, and that the key to success is to work together towards a common goal.

“People looking to invest will be impressed how positive people in Cornwall are, and how welcome the community is to outsiders.”