by Editorial Board
in Arts and Culture, News and Announcements
Reading Time: 2 mins read
24 1 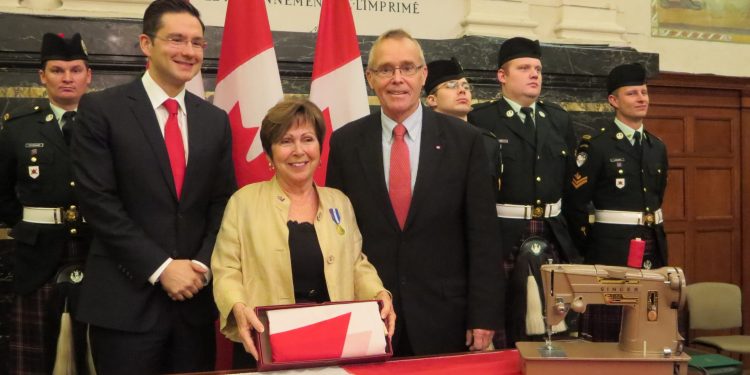 Finch, Ontario – In recognition of the 50th anniversary of the red-maple leaf flag, the Stormont Dundas & Glengarry 2015 International Plowing Match & Rural Expo has announced that Joan O’Malley will be the official parade marshal for the match which will be held in Finch, September 22-26, 2015.

O’Malley, the Ottawa woman who stitched the first red-maple leaf Canadian flag will lead the parade and open the match at the IPM site on September 22, 2015.

A long-time advocate of the British Home Child effort, O’Malley was recently recognized at Parliament Hill for the Commemoration of the 50th Anniversary of the inaugural hoisting of that first flag. In November of 1964 she stitched three flag prototypes on her Singer sewing machine at the request of her father Ken Donovan, a federal public servant and British Home Child. It was an eleventh hour request on behalf of Prime Minister Lester B. Pearson, who intended to fly the three designs at his Harrington Lake, Quebec residence prior to the upcoming vote in the House of Commons. The great flag debate was concluded in Parliament on December 15, 1964, and the flag officially flown there on February 15, 1965.

“Given the contributions of the British Home Children to their new country and Joan O’Malley’s role in creating our distinctive red-maple leaf flag, we are very excited that she has agreed to act as parade marshal at the 2015 IPM, “said Jim Brownell, Chairman of the Stormont Dundas Glengarry 2015 International Plowing Match & Rural Expo. “Joan and her trusty sewing machine are truly icons in Canadian history.”

“I considered their invitation to the 2015 IPM for all of five seconds,” O’Malley said. “It’s an honour to be recognized for the role I played in 1964 and an even greater honour to be able to continue to tell the home child story. They contributed so much and should never be forgotten.”

Between 1863 and 1939 more than 100,000 children from orphanages and houses of refuge in the United Kingdom were sent to Canada under the Child Immigration scheme. Most were placed on farms and very few were ever reunited with their families.

“My father was very proud of his new country which provided him a better life and of my involvement in the new Canadian flag,” she said. Ken Donovan was a teenager when he arrived in Canada and worked on several Eastern Ontario farms before enlisting in the air force during WW2. A medical corpsman, he also worked as an orderly at the Ottawa Civic Hospital before taking a job in the federal public service. He was a purchasing agent with the Canadian Exhibition Commission when he retired and passed away in 2004, four months shy of his 91st birthday.

“I’m equally proud of the role he played, of the accomplishments he made in his life and his contribution to his country,” she added.

Requiring upwards of 1,100 volunteers in total, the 2015 International Plowing Match & Rural Expo will be the biggest event ever staged in the three United Counties, with 20,000 to 25,000 visitors expected each day.