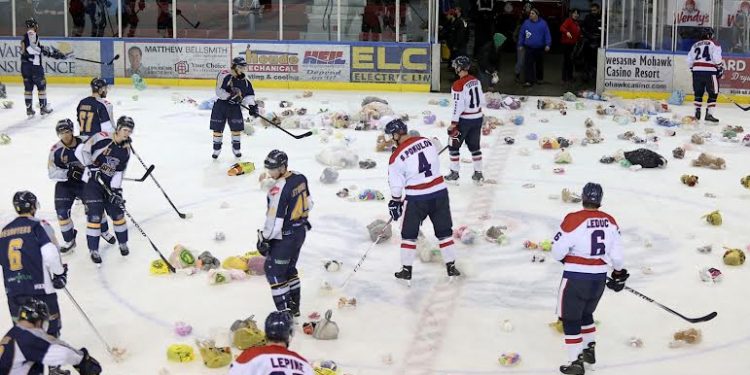 Cornwall Ontario – Jean-Philippe Levasseur and the Thetford-Mines Isothermic spoiled the party at the Civic Complex on Saturday night with a 4-0 victory over the River Kings.

Levasseur turned aside all 26 shots he faced to shut out Cornwall on Teddy Bear Toss Night in front of 1,102 fans.

Fans tossed the Teddy Bears on the ice at the end of the game. Both teams remained on the ice to collect the stuffed toys – approximately 750 of them.

Simon Courcelles opened the scoring for the Isothermic with 4:56 to play in the opening period. Courcelles banked a shot off River Kings defenceman Sasha Pokulok’s leg and past goaltender Pete Karvouniaris.

Loic Lacasse was in the River Kings crease at the start of the second period, replacing Karvouniaris who was forced to leave the contest with flu-like symptoms.

Christophe Losier rounded out the scoring with a shorthanded goal for Thetford-Mines at 8:08 of the third.

The River Kings had their opportunities. Cornwall went 0-for-7 on the powerplay, including a lengthy 5-on-3 in the first period.

The game marked the return of former River Kings forward Nicolas Corbeil, who was dealt to the Isothermic in late November. Corbeil picked up an assist on Losier’s goal.

Brennan Barker had a spirited bout with Mathew Medley at the end of the second period. In the second, Kings captain Steve Simoes dropped the mitts with Alexandre Neron before fan-favourite Chris Cloutier had a lengthy battle with Martin Lariviere of the Isothermic.