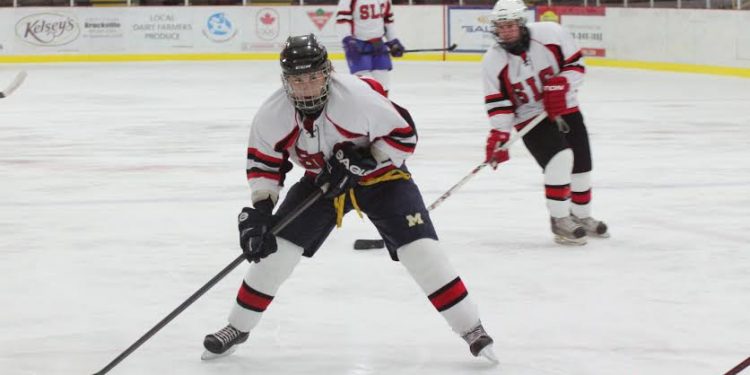 Brockville Ontario — It was a tough start in day one, but the SLC Sharks had a great bounce back performance in game two of the Schooners Invitational.

The Sharks opened game one with a great start in the first period against Bishop’s University, with Jamie Lepine putting SLC-Cornwall up 1-0.  But then the Gaiters would score four unanswered goals in the second and third period, taking a 4-1 lead. Matt Gregoire would score for SLC-Cornwall in the final minute of play, but it was too little too late for the Sharks, as they fell 4-2.

Looking like they just needed shake off the holiday rust, the Sharks came out firing in game two against University of Toronto – Scarborough. It took just 1:25 to open the scoring with Taylor Evans putting the Sharks up 1-0. Larson Payette and Eric Evans would chip in with both scoring goals just before the end of the first period.

With the score 3-1 going into the second, Glenn Belmore scored on the powerplay, followed by Brandon Gilmour recording a natural hat-trick. Christian Leger scored the eighth goal for the Sharks in the third period, making the final 8-2.

“It was a much better effort in the game against U of T” said Shark coach, Sean Boulerice.

“McMaster played really well in their second game as well, so we’ll have to be ready for them first thing tomorrow morning.”

Entering day two of the Schooners men’s hockey invitational, the SLC-Cornwall Sharks face the La Cité Coyotes in the Quarterfinals at 10:00am (today). Should the Sharks win, they will face the host SLC-Brockville Schooners in the semi-finals at 12:00pm, making for an all SLC semi-final.