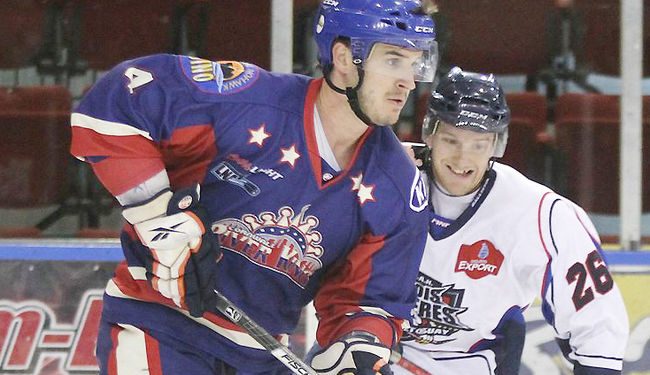 CORNWALL – With training camp less than six weeks away, the River Kings roster is taking shape, particularly on the blue line. The team has come to terms with three more defenceman for the 2015-16 season.

“We’ve got plenty of depth on the blue line, there’s no doubt about that,” said Lalonde.

After stops in the SPHL, IHL, AHL and ECHL, Lepine spent three seasons overseas before joining the hometown River Kings last season. He had seven points in 22 games for Cornwall in 2014-15; he missed several games due to injury.

The 29-year-old Pokulok, the River Kings first pick at the 2012 LNAH draft, will return to Cornwall for a fourth season. In 104 career games with the River Kings, the 6-foot-5 defenceman from Vaudreuil-Dorion, QC, has 99 points.

Therrien, who as acquired from Saint-Georges last se

BBQ SATURDAY: The River Kings will host a BBQ on Saturday afternoon at Jean Coutu in Cornwall. Swing by for lunch from 11 a.m. to 3 p.m. Raffle tickets will be sold at the BBQ for the chance to win a game worn River Kings jersey from 2014-15. Ticket prices are $2 each or three for $5. The winner will be selected randomly on Monday.

Agree to disagree - I have a worm to pick