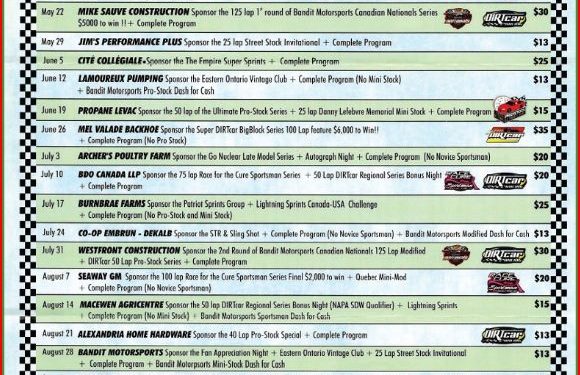 THE NEW SEASON OPENER
Race for the Cure Sportsman Series makes its debut at the Cornwall Motor Speedway!
Article by Martin Bélanger

A new local Sportsman Series will begin iat Cornwall Motor Speedway providing some excitement on the track but also giving back to the community! Over $11,000 in prize and money will be distributed at the end of the new “Race for the Cure Sportsman Series! ”

Current Sportsman driver Steve Morris approached promoter Raymond Lavergne at the end of the 2015 season with his project of having a Sportsman Series while collecting funds towards families that are affected with Cancer, a disease that affects everyone in one way or another.

The Lavergne immediately accepted and the Race for the Cure Sportsman Series is now created with a 3-race Series being run throughout the year at Cornwall. Morris will bring the Pink Sportsman car that will be parked behind the grandstand during the whole racing season and fans will be able to sign their names on the car while donating funds towards the cause Pins with the cancer logo will be offered to the donators. This car will also serve as the pace car for all three Sportsman Series races. For the final 100-lap race, lap sponsorship will be available at $10 each with some specific laps being a little higher.

The Lavergne family already agreed to match the total amount! The lap sponsorship grid will be up on our Facebook page in May. All the money collected throughout the season will be given to families affected with cancer and in need of a little help financially. On the track, the Series will be composed of 3 events, two of 100-lap distance and one of 75 laps. The first race will be part of the Season Opener on Sunday, May 15th with a 100-lap race with $2,000 to be given to the race winner.

The second race will be run on Sunday, July 10 with a 75-lap event with $1,500 provided to the first place driver. The champion will be crowned on Sunday, August 7 with a final 100-lap race with again $2,000 being given to the race winner. Several sponsors have embarked on this new series, TAS Racing will give a full body to the Series champion while providing four Hoosier Tires to the second place finisher in the championship and two Hoosier Tires to the third spot. Olson Fabrication will sponsor the $2,000 point’s funds, with the champion collecting $750, second place $500, while positions 3 to 5 will receive $250 each. Seaway GM will also be part of the series sponsoring a new GM 602 Crate Engine, this prize will be given via a draw between all drivers that took part in the 3-race series. Total value of prizes and money is worth over $11,000!

This is exciting news about this new series which will be part of another busy schedule for 2016 at the Cornwall Motor Speedway Speedway.

For more information on the upcoming season at Cornwall. race results as well as contests, please visit the website at www.cornwallspeedway.com you can add us on Facebook at www.facebook.com/cornwallspeedway or on twitter at @cornwalspeedway