by Editorial Board
in Arts and Culture, Columns
Reading Time: 2 mins read
28 2 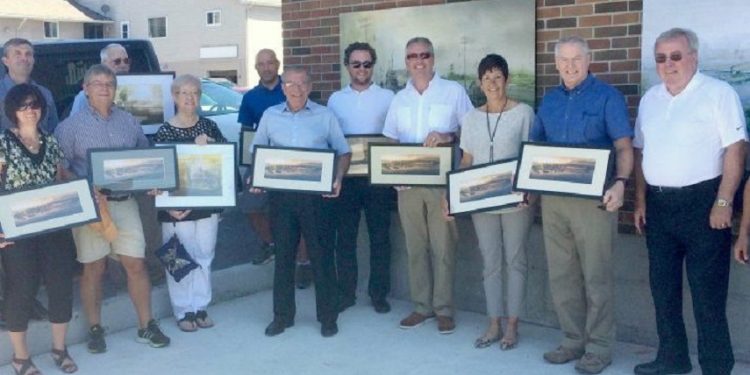 The tour, which includes nearly 20 large-scale historical illustrations that have been erected along the Cornwall waterfront, commemorates the rich history of the Seaway City.

Tuesday’s unveiling marked the end of two years worth of work to bring the tour to life.

“I invite local residents, and those visiting our community, to enjoy the Cornwall Historic Walking Tour and steep themselves in our proud history,” said Le Village chair Michel Dubuc. “The walking tour is an excellent example of the great things that happen when organizations enter into partnerships.”

Brenda Campbell, chair of the Downtown BIA, said the tour is just the beginning of similar work.

“In the coming weeks and months, plans will be formulated to grow the Cornwall Historic Walking Tour to encompass more than just the waterfront,” said Campbell. “We want local residents, and visitors to our community, to know about the role downtown landmarks like the Capitol Theatre and Cornwallis Hotel played in building the foundation of our city.  It is important to pay tribute to the individuals and businesses that helped put Cornwall on the map.”

Denis Carr, manager of Heart of the City, called the tour the first step in a long chain of events to bridge the future with the past.

“I’ve already heard from young people who have enjoyed the tour and get excited about the history of Cornwall,” Carr said. “These are the kinds of relationships we want to build – to ensure that our traditions live on through future generations.”

While passersby can enjoy the tour in any location, and from any direction, the fun begins along the Recreational Path in the west-end of the city with an illustration depicting Gleason’s Lock, or Lock 19 – an integral part of what was once the Cornwall Canal. Stops along the tour include illustrations representing the paper mill, Hotel Dieu Hospital and the Cornwall Orphanage.

Partnerships were created when project organizers reached out to Cornwall artist Pierre Giroux, whose prowess with the paint brush brought the illustrations to life. Giroux’s artwork is known throughout Canada. Local historian Lily Worrall completed much of the research that went into the illustrations, to ensure that material is accurate.