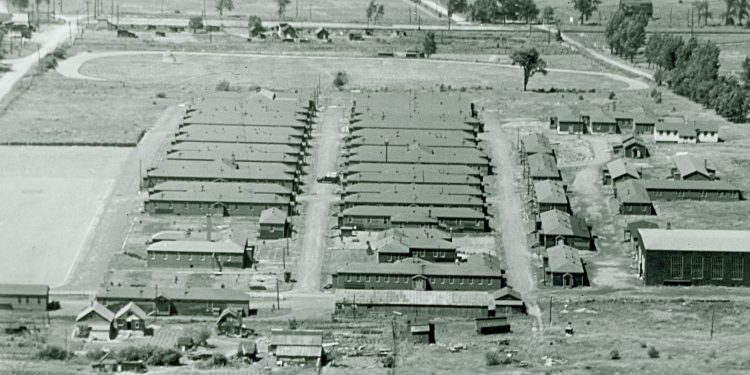 An area of interest that people frequently ask about is the former Cornwall Army (Basic) Training Camp. The 35 acre training camp on the Dingwall estate opened on October 9, 1940.  The camp was located between Marlborough St. and McConnell Ave. from 6th St. E. to about 8th St. E. When it closed in 1944, Lt-Col. Rodolphe Larose had put approximately 15,000 men through the 30 to 40 day basic training course as well as the N.R.M.A. four-month course.

Recruits were to be attached to various to regiments of the Canadian Army Reserve, formerly the Non-permanent Active Militia. During their training they were well-oriented in the traditions, history and war record of their respective units. The training was described as: “more intensive than any before in Dominion’s military history.” It was two months worth of Army life compressed into one month. The training pertained to modern warfare and included foot drill, care of arms, protection from gas, weaponry and tactics. The training day was from 8 a.m. until 5 p.m. with respite on Saturday afternoon and all day Sunday. The third class began on January 10, 1941 with the addition of use of the rifle range at the camp drill hall. A great many of those conscripted to the reserve did volunteer for active duty before completing their training.

The camp opened with a capacity of 750 trainees and a staff of 177 apart from hospital staff. The C.O., Lt-Col. Larose formerly commanded the Hull regiment. Assisting him were Major Walter Chambers of Pembroke and Captain Delamar Boyce of Ottawa was Adjutant. In addition to local Anglophones, it was planned that all Francophone trainees from the Cornwall and Ottawa areas would receive training at this Centre. The two linguistic groups bunked side by side.

After the War, a few of the former Camp 31 huts made their way to Cornwall parks for use as club houses and two were assembled in an inverted T on First Street West for use as a YMCA.

Between January 22, 1948 and October 1 of the same year, 35 to 43 County Gaol prisoners from Brockville, Cornwall, Kingston and Ottawa dismantled 30 huts from the camp to be relocated to provide temporary lodging during the construction of the Rideau Industrial (jail) Farm at Burritt’s Rapids. On October 1, Rideau Industrial Farm’s superintendent, Edward Griffin, reported that 30 Camp 31 buildings, purchased from War Assets Corporation, had been dismantled by that time preparatory to shipment and that six of those had already been shipped and three re-assembled as temporary barracks. The 43 inmates then at the Cornwall site were completing clean up of the decommissioned Camp 31.

Today the site is a residential neighbourhood west of the hospital and is still listed on DNDs UXO web page as “in assessment”.

Agree to disagree : I ain't no doctor, but I'm losing my patience!