by Editorial Board
in Columns
Reading Time: 1 min read
53 1 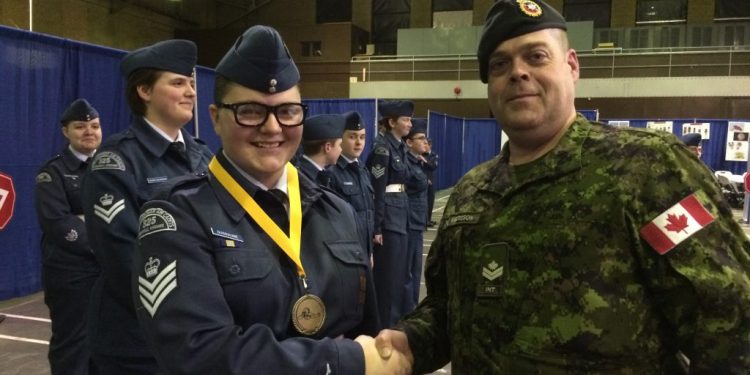 Cornwall Ontario – Flight Sergeant Tanya Audrey Dussiaume has been awarded the title of Top Shot in the Zone 19 Zone Shoot held as part of the competition series with the Canadian Cadet Organization held on April 1st in Cornwall. FSgt Dussiaume is a member of the 325 Cornwall Kiwanis Royal Canadian Air Cadet Squadron here in Cornwall.

The competition is the second stage of a four-stage competition which eventually leads to a national level competition. Zone 19 covers the area from Brockville, to South Ottawa, to the Quebec boarder. Twelve teams competed in the competition, with 60 competitors in total.

Marksmanship is a sport merging technique and skill as a competitor attempts to shoot the highest score, or a bulls-eye. Unlike straightforward target shooting, competitors fire a single shot at each target, forcing them to re-orient for each shot and focus on technique over habit.

The 325 Cornwall Kiwanis Squadron entered two teams this year, with each team consisting of 5 cadets. Both teams were coached by MCpl Bradford Sigurdson, a volunteer with the squadron.

The squadron is sponsored by the Cornwall Kiwanis Club and Royal Canadian Air Force Association Wing 424, donating funds towards equipment for the team.